“Productive Farmland Disappearing under a Blanket of Trees”

More RABID NONSENSE from people who should know better.

I felt compelled to write this tirade in response to continued, misinformed allegations from Federated Farmers, Beef and Lamb, Dame Anne Salmond, The Flat Earth Society and the Tolaga Bay Board Riders club.

In an “age of misinformation” it saddens me that I waste so much of my valuable time pointing out to the misinformed, that regular records of New Zealand’s forest estate have been recorded and published, almost annually for a hundred years.

The National Exotic Forest Description is compiled by contractors to give as accurate a picture of commercial forestry as can be reasonably obtained, short of walking around the country with a spray can and paint marking each tree as it’s counted. The entire document is available on the MPI website, for whom it is produced.

In the tables below, which have been taken from the most recent data published, it can be clearly seen that despite the best efforts of Carbon Farming New Zealand Ltd, the planting rates for new forests have not even reached the levels of the 1930’s and are nowhere near the rates of the 1970’s and 80’s (Figure 13 below). 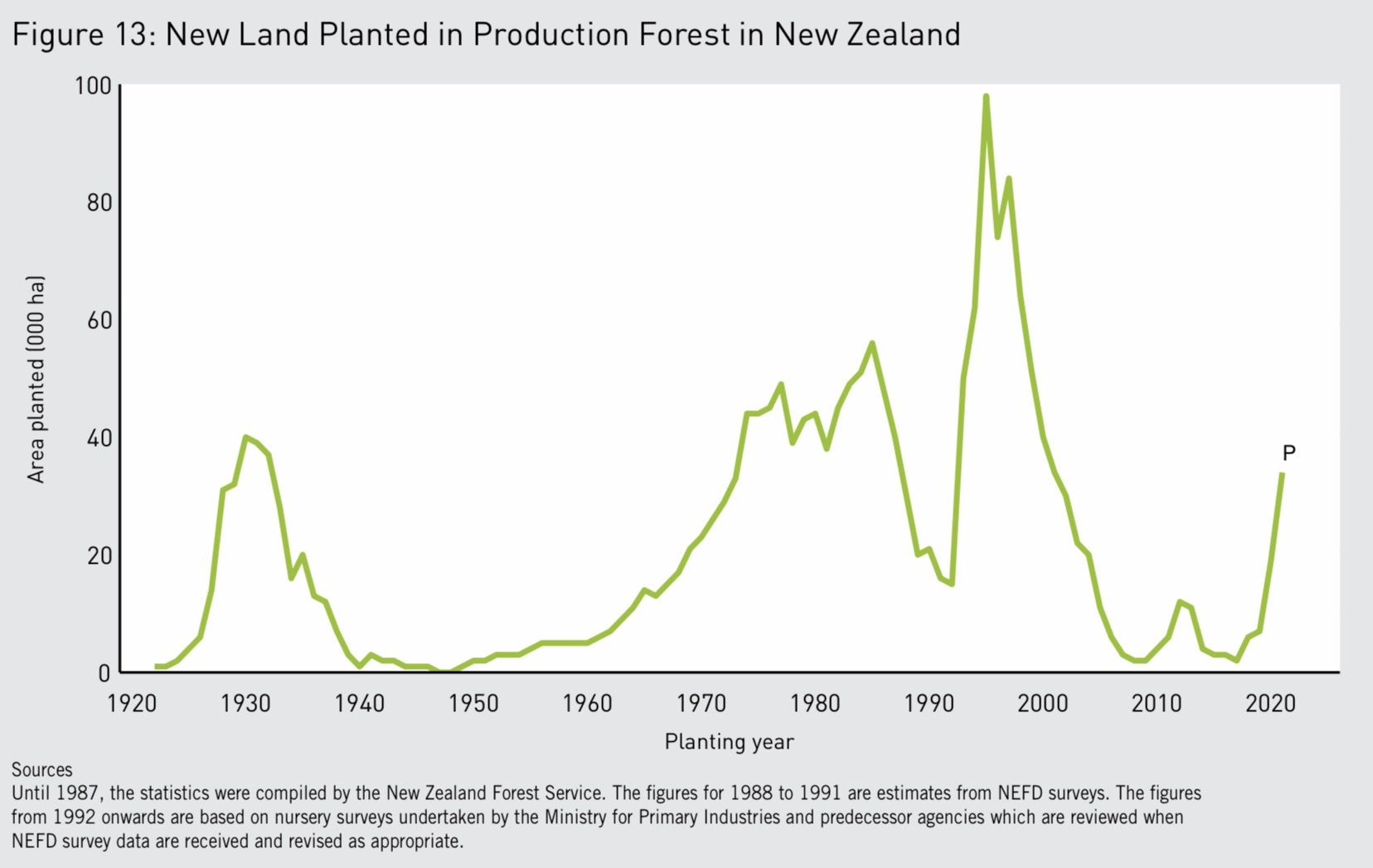 During these times, tens of thousands of hectares of hill country land has been denuded to make way for ryegrass and clover. In case this has escaped your mind, these are exotic species. Referring to the title above, who decides what “productive” is anyway? If you happen to be a vegetarian, you might suggest that no animal grazing was productive anywhere.

Referring to Figure 3 below, the advent of mechanised harvesting of radiata pine has actually seen a decrease in the size of the forest estate to a level below the peak of 22 years ago. Hopefully in the next year or two the New Zealand forest estate will exceed that historic level. If this is not the case then it will be clear that New Zealand has done nothing to address what most of us now believe to be a climate emergency.

So with this background, I find myself having to argue the case for exotic forestry to remain eligible for the Permanent Forest category of the ETS. We are 18 months out from a general election and what I can see in the calling for submissions on the Government proposal to overturn an undertaking made last year in the reworking of the ETS legislation, is a fear of loosing votes from the primary sector.

What seems to have escaped the government politicians is that, on the whole, the primary sector don’t vote for them anyway.

Vaughan Kearns
Inhabitant of a small island, that appears to be getting smaller.