I have a strong interest in the biomass-as-energy-source sector of renewable energy generation and I see it as inevitable that this country’s incomprehensible barriers to uptake will shortly be torn down as the many benefits that could accrue are just too compelling to be denied much longer. Those with the land to grow trees (and other biomass sources) ought to be the first to be enlightened that it is now entirely possible to burn wood (et al) with close to zero localised air pollution and that it is done to great effect and at a prodigious rate in Europe as a widely understood everyday activity. It is my strongly held opinion that every farm in this country should consider planting a mixed woodlot and/or crop of fast-grow/short-turnaround species for biomass production. Such on-farm diversification would have far reaching positive consequences in both commercial and environmental contexts but there are presently few financial incentives to do so because the market for biomass-as-energy is almost non-existent here. This is largely because forestry production in NZ is considered strictly for sawlog production and essentially ignores the local-for-local energy creation of a distributed biomass production network.

The premise of my submission to ORC was that wilding pines ought to be treated as a resource rather than as a problem; once that volte-face is accomplished the management of the trees becomes automatic and revenue positive. What has happened instead is that farmers down this way are now receiving tree eradication orders (as if it was their problem alone) and the Otago Regional Council is about to impose yet another quixotic region-wide exotic species eradication levy as part of its rates assessment because of the idiocy of the way wilding pines are to be opposed here.

The domestic supply chain for biomass based fuels (pellets, chips, firewood) is choked so the uptake of modern clean-burning biomass fired heating systems is choked ... or is it the other way around? We accept nothing prior to Euro 5 & Euro 6 vehicle emissions standards, as determined in Europe, as the acceptable benchmark under which motor vehicles can be imported into the country. However, each model of each manufacturer’s wood fired heating devices, and there are hundreds of manufacturers and thousands of devices, must be tested and certified here - “under tough Kiwi conditions” (yes, as we all know, there are no tough conditions in Europe, NZ is unique) - as opposed to simply accepting the Euro certifications they already carry as we do with motor vehicles. So guess how many manufacturers and importers are going to bother with that cost for a market of 4 million when they are already serving a market of 750 million? Is it the chicken or is it the egg? Bureaucratic stupidity on a grand scale and all that is required to fix it is a visit by someone with a functioning brain to a few Euro trade shows to see what is ?possible and what is available off the shelf to do it; or just maybe some local manufacturer could figure it out and build it here. There is some concentration on this now at the larger scale commercial end of the field but the critical domestic end is being completely blocked by our utterly invalid clean air regulations that prohibit installation on less than two hectares in most suburban areas (see attachments to understand this) and by the requirement for model by model re-certification.

So here we are with the least energy efficient residential building stock in the developed world, homes from which Central Heating Systems, considered the norm elsewhere, are totally absent, and our regulators are converting the population away from heating via a cheap renewable energy source, biomass, to heating with electricity via heat pumps, with all that implies. This, on the erroneous and invalid assumption that burning wood always causes unacceptable levels of localised air pollution. This transition is being forced by a regulatory environment that is devoid of any trace of a “shit, we got that wrong, maybe we’d better have a rethink” mechanism. The 21st century clean-burning replacement to the Model-T Ford log burners we use are staring them in the face but they ban their installation in most areas of the country.

Sporadic installation of wood gasification boilers as the heat source for modern residential central heating systems (which also provide domestic hot water as a small added side benefit!), as central heating slowly penetrates the built environment of this country, is the obvious way to gradually develop the biomass-as-energy supply chain. This self evident strategy is specifically ignored by government - I heard the Assistant Minister for the Environment say so at the “Yes We Can BioEnergy Symposium” in Wellington earlier this year ... in the same speech in which he said it was a great idea to decommission the Euro-style electric trolley bus system in the nation’s capital and replace those emission free public transport units with diesel powered buses ... but the biggest thing we could do to reduce New Zealand’s GHG emissions was to convert the nation’s car fleet to all E-vehicles.

Whilst E-vehicles are undoubtedly coming, and that is a very good thing, the Minister didn’t seem to grasp the breathtaking logical disconnect of these two positions. Such is the level of governmental comprehension of these issues; they haven’t a clue and yet they decide policy. Not a word about how all the additional E-lectricity to charge this new national fleet of E-vehicles was to be generated, not a word about energy efficiency, not a word about promoting bio-energy as he spoke at a bio-energy conference and certainly not a word (by anyone at the conference) about doing anything at all in the residential sector as the entire emphasis was on the industrial and the corporate. This despite all the pathetic PC hand-wringing twaddle about how “Kiwis are entitled to live in warm, dry, comfortable homes” (whatever that means) and how “landlords must install insulation” (whatever that means) whilst local governmental consent authorities still allow thermal energy colander homes to be built every day and national government won’t allow them to be heated in any rational manner.

The burning of biomass as an energy source will make viable the large scale planting of biomass for that purpose here in New Zealand as it has done over much of the rest of the world. This will be a valuable added income stream for farmers and it can often be accomplished on marginal or unproductive land, riparian verges, mountainsides, highway and road reserves and so on. It allows a totally different set of economic metrics to be utilised to those considered for sawlog plantations. Government, as is so often the case, simply has to just get out of the way and let it happen.

But, despite being presented with all the information they could possibly have required to take a different and far more rational direction on the issue... guess what? Yes, as I said earlier, tree eradication orders to local farmers and a new region-wide rates levy to fund fighting the good fight against the dreaded wilding pine. No strategy whatsoever for the conduct of that fight, mind you, just a hundred grand to “fight wilding pines”, then on to the next item of the meeting agenda: “how to control wintertime air pollution caused by smoking log burners in our atmospheric inversion plagued townships” ... such is the compartmentalisation of the bureaucratic mind.

So, can I distil my thirty five pages into something far less taxing to read? Well. I guess I’ll have a go here in point form:

Those interested enough in these musings to want to learn more about the astonishing level of maturity and sophistication of the biomass industry and the market and appliances overseas, as well as what it is that makes our homes so appallingly energy inefficient, may care to open and read the longer Wilding Pines Submission version that is attached here. Also attached here you will find information, which I can’t commend to you strongly enough, prepared by Brian Anderson of Christchurch based Bryn Martin Consulting Engineers who is vitally interested in these matters as well and has done some exemplary investigative work on the absurdly invalid, so called “clean air regulations” and how their utterly improbable outcome is to make impossible the installation of the latest generation of truly clean burning wood fired appliances here in New Zealand where they are needed so desperately.

A closing teaser to tempt you to investigate further and perhaps take some action: how big is this stuff really getting elsewhere? A recently commissioned pellet plant in the US is processing 30,000 tons a day of forestry waste and other materials. Yes these are the same pellets we buy at Mitre 10 in 20kg bags. They are shipped across the Atlantic in bulk ore carriers and used to fire power stations that have been converted from coal to biomass as their combustible fuel source. Coming soon to a location near you ... biomass fired energy production systems. All that need happen is for you to call your local member and tell him to get his absurd regulations the hell out of your way. 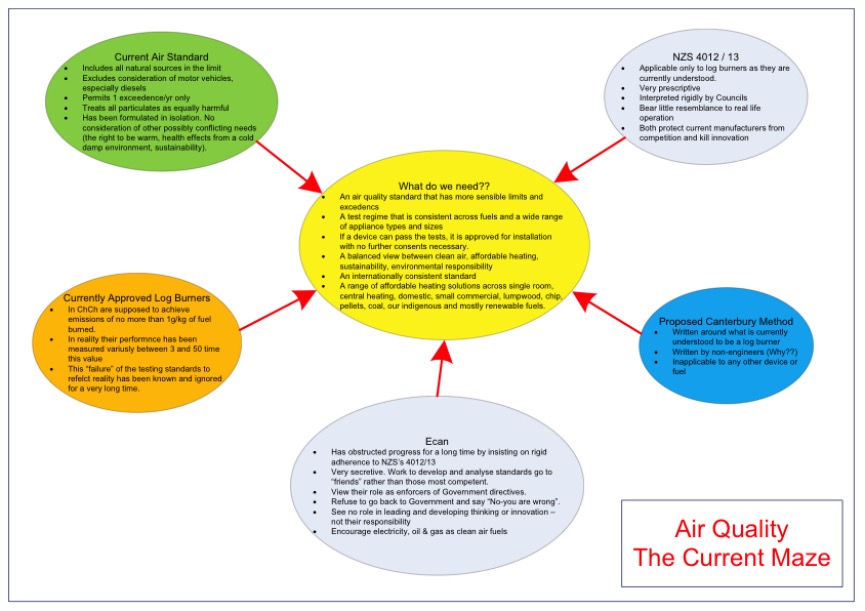 Ha…wilding pines from “neighbouring land causing a problem by growing on your place…you must obey and deal with someone else’s problem” you put me in mind of the Matamata district council back before amalgamation of councils and the creation of regional councils.

They served me with “notice to clear noxious weeds” notably to clear my “vast and luxurious crop of plumeless thistles in my front paddock”. Council rule was “not allow seed dispersal”.

MAF in its wisdom had released some wevills with a name I forget but suffice to call it “rinoceriss-something or other” way over near Opotiki. I heard about it, drove and collected a heap of seedheads full of this wonderful bug and released them a few years previously.

I took a whole “plumeless” plant covered in flowers, about 8 foot high to the Tirau Council office and asked to see the relevant officials. “Please confirm the rule for me” I say.

They reply “Not allowed to let noxious weeds seed”.

“Please come look at my plant that is in the boot of my car and show me the seeds”.

They point at the flowers – I ask again to “show me the seeds”.

Of course they are very tender in the hands being pen pushers and cannot show me other than to point.

I cut open every flower for them. Not a single seed to be found but lots of fat “rinos” … fat from eating the seed of these thistles. They eat also nearly all noxious thistle seed, nodding, plumeless, variegated etc.

What is the rule these days? You are not allowed to let your noxious thistle flower.

Looks to me that Regional council must be in the pay of the chemical companies or something like that to first of all change the rules and override the biological solution from MAF days. But also to not allow maturity prior to mowing is wasted time and money… to mow thistles before they flower only encourages multy headed regrowth… to mow after flowering when the plant has become woody causes death as the plant biologically has completed its cycle. Maybe they are in the pay of the oil barons!

After flowering is also the correct time to harvest for making paper, the finest quality paper for export to Japan can be had from these thistles!