Rejuvenate or die- The future of NZFFA

The NZFFA organisation is dying and this is happening at a time of unprecedented opportunity.

From my reading it strikes me the organisation has two primary objectives; one is political – to further the interests of forest growers; the second is to educate its members and the community at large.

The political agenda can continue to be effective even with a very small membership as long as there is a committed passionate core.

Currently education lives and dies on membership but could continue via easily accessible information of the on-line kind.

Field days (and their downstream benefits) are the ‘X’ factor that NZFFA provides which cannot be gained any other way and has been the gold that sustained membership up until now.

Originally it was geared for a very specific group; Neil Barr’s farmer mates. However, things have changed.

Beyond the fact of declining membership there are several background tendencies at play. I speak specifically of family farms that are being sold out of family ownership either to the neighbour (making bigger farms) or to some corporate entity (with farm managers) or get subdivided into ‘lifestyle’ blocks.

These facts along with the aging membership guarantee the decline in farmer membership of NZFFA.

Where could new members come from?

Lifestylers? They are an eclectic bunch who often have lots of dreams and little knowledge.

I think it is also true to say that they often own land that is much more than the classical 10 acres. For example, I think of an acquaintance of mine in the Hawkes Bay who owns 100 acres and as a hobby plants the property (grazing leased to the neighbour) in eucalyptus and pines. He does not know what he is doing, is not a member of NZFFA but is having a great time planting. He strikes me as typical of the potential new membership.

When lifestylers think of trees their priorities are probably more towards ‘conservation’ and feel-good factors and not really into planting a forest (too big) or harvesting trees (too far in the future).

It strikes me that Farm Forestry is at the moment invisible to them. They are more likely to belong to the ‘Tree Croppers Association’ https://treecrops.org.nz/ .

Does the organisation go for recruiting lifestylers? 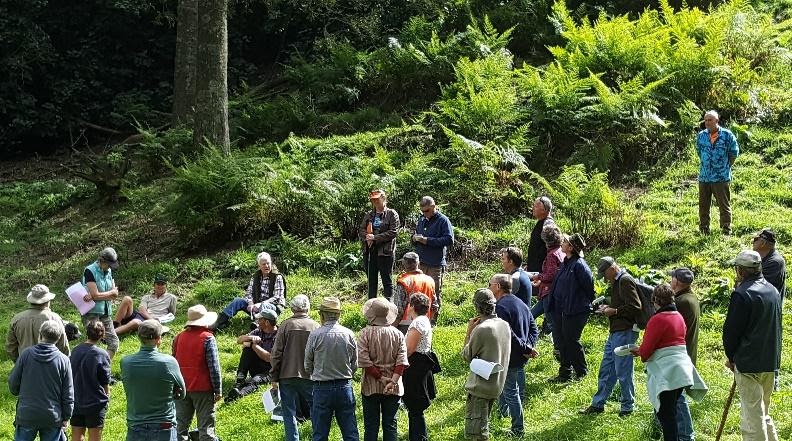 I organized the Tree Crops Association national Conference on the last weekend of March.

I agree that the interests of Tree Crops members overlap with NZFFA members. I briefly pitched the NZTCA Conference at a NZFFA Northland field day, before Covid delayed it by a year. I probably should have liaised with NZFFA before setting the new date.

I think NZTCA membership is getting older too, but on the other hand its Auckland branch monthly meetings now attract more people than I remember over the 10 years of my membership.

There are some obvious and free ways to use the synergy. NZTCA has a website and a printed  newsletter. It would cost neither organisation to advertise each other's branches and events. Some of the articles could probably be used by both groups. Perhaps more formally, the two could exchange speakers or offer guest membership?

Resonates with me re lifestylers.  We have 10ha in Nth Canterbury hill, and experienting with durable eucs, cypresses, as well as poplars and a pich of pine nuts. (I say 'experimenting' as our place is extreme dry and not where you'd go to make money from a forest.) We are hosting a branch field day 22 April to try to both learn and disseminate some useful stuff. I am particularly interested in finding out about how ETS rego might work for us. If we can work at our scale,  the gate might open for other small-scale operators.

Seems to me we are at a cross roads, either stick to timber trees which in effect is commercial tree farming with ties to FOA or go down the track of tree gowing which is basically growing trees for whatever reason. The later is fine as growing trees is enjoyable and if that is the path that is chosen then why not amalgamate with NZTCA as there is an obvious overlap. However NZFFA has to my mind always had timber tree farming for profit as a motivation. Seeking future timber resourses on farms to add to land owners diversity. With carbon added on to stimulate tree planting at this point in time we need to think hard as to wether the NZFFA wants to move away from the comercial forest growing sector, which seems to be gaining good momentem market wise, and go it alone. Eitherway a choice needs to be made.

At the start the association was farm forestry and horticulture ; farm forestry and shelter; Blokes of the trees, etc. I first came across farm forestry in the lower north as small wood lots and shelter belts of wattle for fuel; cypress for fencing; and pine for milling on small local mills that approximated today’s portable mills. The trees were probably planted in the 1930s with the war intervening. The genetics were poor and silviculture absent. In more sheltered localities such as Salingadale of the botanical Bartlett family farm

Neil Barr’s “farmer mates” were just coming out of a very trying time. Their economies of scale were similar to today’s life-stylers but without the choice or finances. There was equal emphasis on trees for shelter; for fuel; for timber for on farm use; and for off farm sales. Their interests in trees were at times encyclopaedic. I found Neil as warm open and generous of his time, as were the majority around farm forestry; foresters and scientists included.

Tree Crops started with a similar ethos: crops for on farm use as in J Russel Smiths “Tree Crops: a Permanent Agriculture” (from which “permaculture” was derived), and tree crops for sale. An emphasis on developing crops for commercial orcharding took over. The membership split off into various industry groups leaving a core of enthusiasts. That association is adapting well.

Farm forestry has taken a similar path: starting with a wide interest; moving to an emphasis on a commercial forestry model; consultants providing the information, contractors the silviculture, and purchasers the harvesting. There’s no need for the association for most growers, life-stylers included. It is the core group of enthusiasts that is the key,_ no matter where they come from. The problem for the association is participation: that is, providing an environment in which participation can thrive. We have the technology but the executive is still pining for status as an industry player that is not the natural role of the association