I planted a small stand of E. maculata (Spotted gum) 21 years ago in Northland, after being really impressed with an old stand of trees that were milled by David Davies-Colley of Eucqual sawmills. The timber was superb and so seed was collected and subsequently planted.

Eucalyptus maculata is a durable eucalypt species with a high quality decorative timber. The timber is extremely strong and heavy and used for heavy engineering applications in Australia on account of its strength. It is also very tough and used for tool handles because of its high impact strength. It is also favoured for flooring and is extremely hard. 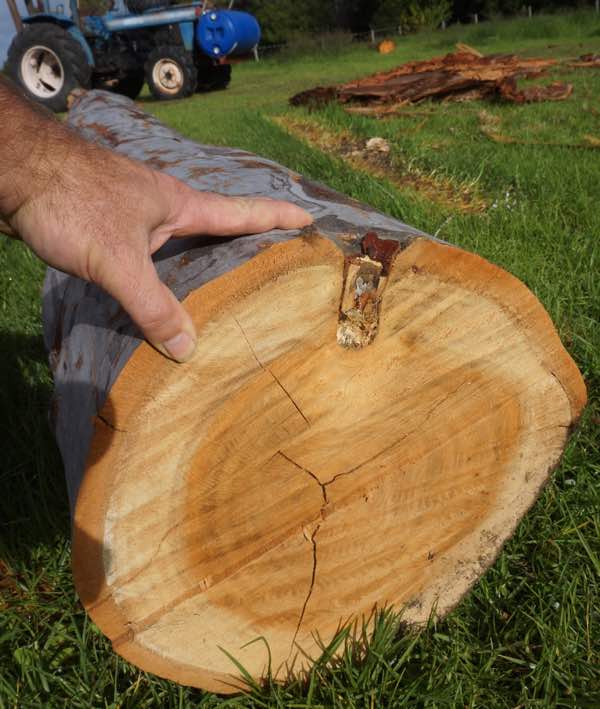 A couple of trees blew down in a big storm we had a year ago, so Li Legler and I milled them up on his woodmizer. The pruned buttlogs were sawn into boards, but the headlogs were too small for sawing boards. Knowing that E. maculata is a durable eucalypt species, and noting that the hearwood content was reasonable in trees of this age, we decided to saw these smaller logs into posts and estimate the costs of producing these.

We cut the biggest buttlog that was pruned to 5m into two lengths (2.5 m long and 45 cm sed, 2.4 m long and 42 cm sed) and got plenty of good quality clearwood because these logs were pruned well and had a small DOS (Diameter over Stubs). Where the smaller logs were straight and between 30 cm and 20 cm SED (small end diameter), these were selected for milling into posts. The smaller logs were each sawn into four posts by quartering the logs, then milling the sapwood off into square posts. The quality of these posts was good, with some residual curve on the inner two faces. This was the most efficient method we could come up with that met our quality standards for a marketable product with two straight faces.

The average time to saw 4 posts from logs 20 cm - 30 cm SED was only 7 minutes from loading to completion of milling. The 20 cm logs produced 8cm width square heartwood posts and the larger logs 10 cm posts. Post (and log) length was 2.4 m, but longer posts could potentially be milled provided the sawyer accepts more waste and larger diameters are used.

At least 30 posts could be produced per hour using a woodmizer bandsaw, and at $100 per hour the production cost is $3.33 per post. There is no doubt in my mind that this cost could be reduced as efficiency gains would be likely in a commercail setting. The slabwood should produce some revenue as E. maculata is one of the best firewoods in existence.

Provided there were a market for the product, it certainly looks viable to be cutting posts from small diameter headlogs of durable eucalypt species once they get to 20 years old and have sufficient heartwood and diameter to be cutting square posts. My impression is that it is looking viable to be harvesting durable eucalypts in 20-30 year rotations, provided there are markets for high-density sawn timber, posts and firewood.

These posts are much heavier than CCA treated radiata posts, and I hear that square posts are more difficult to drive because for good appearance they need to be kept "square". I assume that moder battery drills would be used for fixings rather than nails, which might be problematic given the hardness of high-density eucalypt.

I'd be really interested to hear about others experiences, especially with utilisation of square heartwood eucalypt posts. 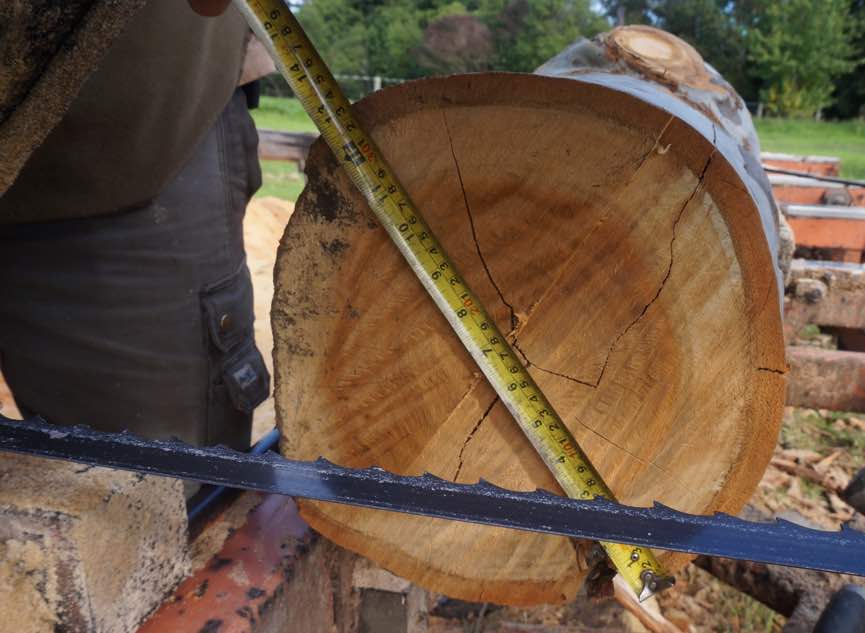 30 cm SED log on the bench ready for quartering. The sapwood is approximately 6 cm of the diameter.

This cut shows the bark, then sapwood, then strong contrast between sapwood and heartwood. 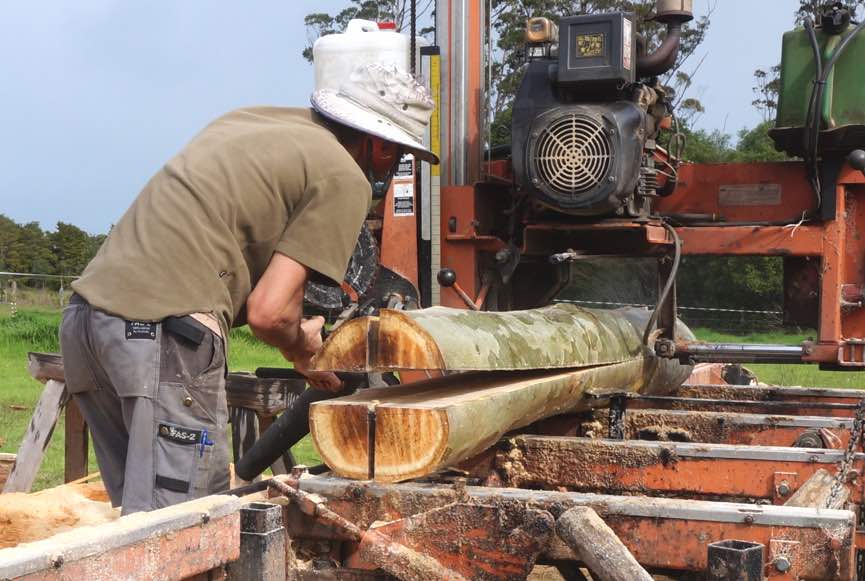 Straight cuts to remove the sapwood 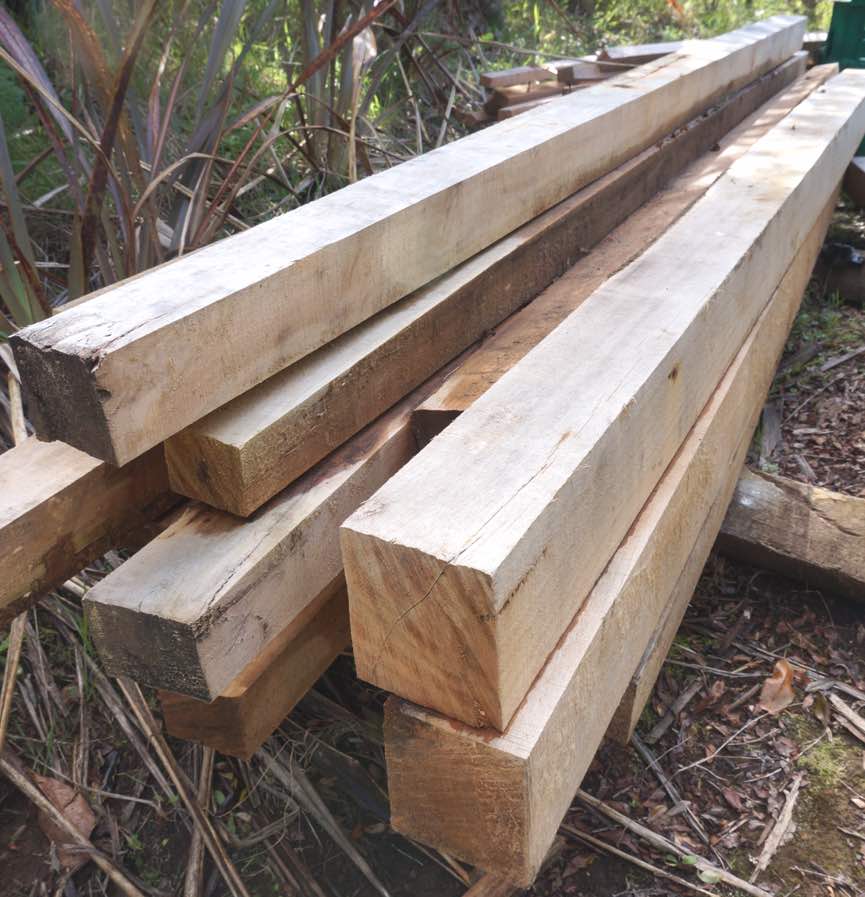 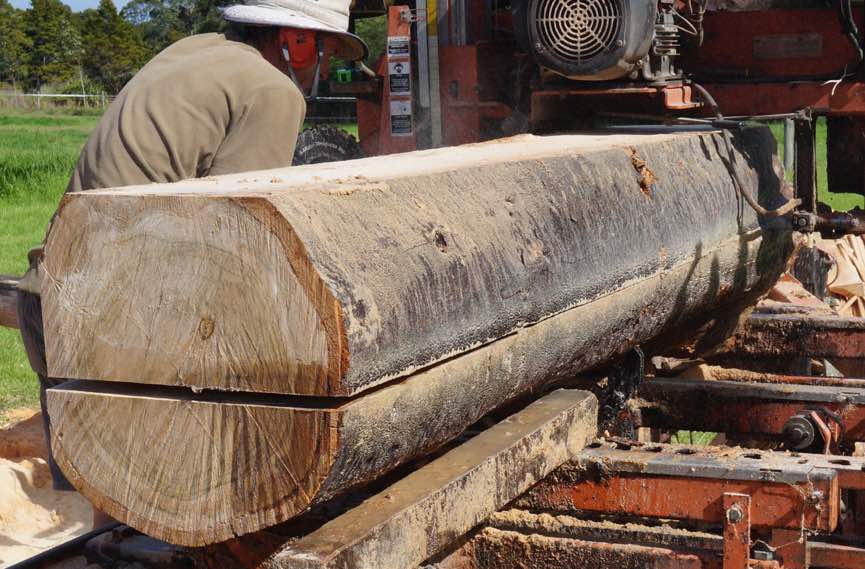 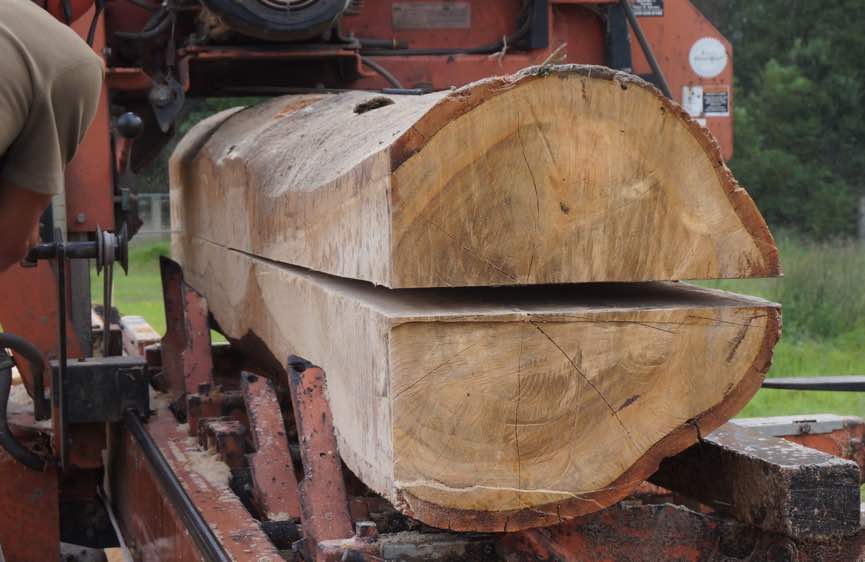 Second short buttlog being sawn. A single 5m log would have resulted in too much movement over the full length. 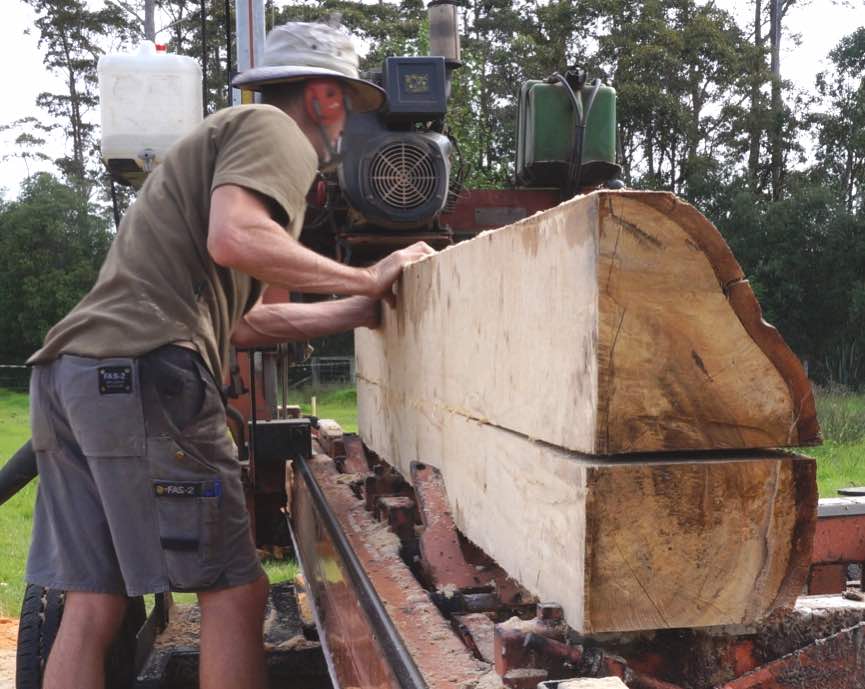 Looks good Dean. It is a shame about the wide sapwood band though. I cut a few 10yr old maculata down (your seed source) a few years back and found no significant heartwood at all. Same experience with quadrangulata and microcorys in the same stand. By contrast the pilularis in the same stand had very little sapwood. My globoidea thinnings of about the same age as your trees are producing much narrower sapwood bands often 10mm or less, so the posts I'm cutting are obviously wasting a lot less of the tree. Just another plug for stringybarks.
It will be interesting to see how your posts perform in the ground. Any chance of getting them used in the same spot as other species of the same age for comparison?

Did you leave any of the trees unpruned? I know maculata is often planted in Aus. for it's ability to produce good timber without any pruning.  My 3 and 4yr old trees from CSIRO seed orchard seed at this stage seem worse form than some seed I collected from the roadside.
I think maculata should be more widely planted for its aesthetics and its out of season flowering which is great for bees, but possibly only cut as long rotation sawlogs when its superb timber can be properly utilised and appreciated.

Thanks for your post Ben!
Yes my intention is to document the durability of these posts and compare with other species, maculata is supposed to be class 2 so should be quite good.
Agreed, monocalypts (stringybarks) have the right properties for our plantations: early heartwood formation, narrow sapwood band... and pest resistance.
Yes, E. maculata really is a great looking tree... and the wood has amazing properties, especially its impact strength.
Spotted gum does seem to shed branches readily and would likely produce reasonable length clearwood boards without any pruning... but here in NZ seems to need form pruning because of it's propensity for double-leadering. Was hoping those CSIRO seeds would help!

Hi Dean, Interesting article. There is a rising interest in durable hardwood posts for organic orchards here in H.B., as all new and replacement posts and poles have to be untreated. I have been told by orchard managers that they are currently imported from South America (they have FSC branding). It also appears that as apple yields increase more posts will be needed to support the heavier crop per tree. Certainly looks as though there will be a ready outlet for ground durable posts at last, providing there is a reliable resource of course.