Special thanks and acknowledgement go to:


In addition, discounts for grades, widths and lengths were based on comparisons:

1. Price estimates for lengths involved estimating costs and values of finished products from which residual value was then calculated.

Prices per nominal cubic metre of graded timber were calculated for each product profile and are presented below.

Prices per nominal cubic metre of graded timber were calculated for each product profile and are presented below.

The narrow-width boards (50 mm and 75 mm wide) were priced as a residual value by estimating costs to produce a laminated panel product and subtracting these from the sale price of two laminated panels, each produced from the two board lengths. The results are presented below.

A scale diagram of the case study stand (See Appendix 11) was produced on which two plots of 224 m2 each (8 m x 28 m) were positioned that included a total of 21 trees and excluded edge trees.

Plots were positioned to avoid edge trees. Edge trees were observed to be larger than trees within the stand and thus not representative of trees within a larger stand for the purpose of deriving per hectare values. Selected values from stand trees are presented below. 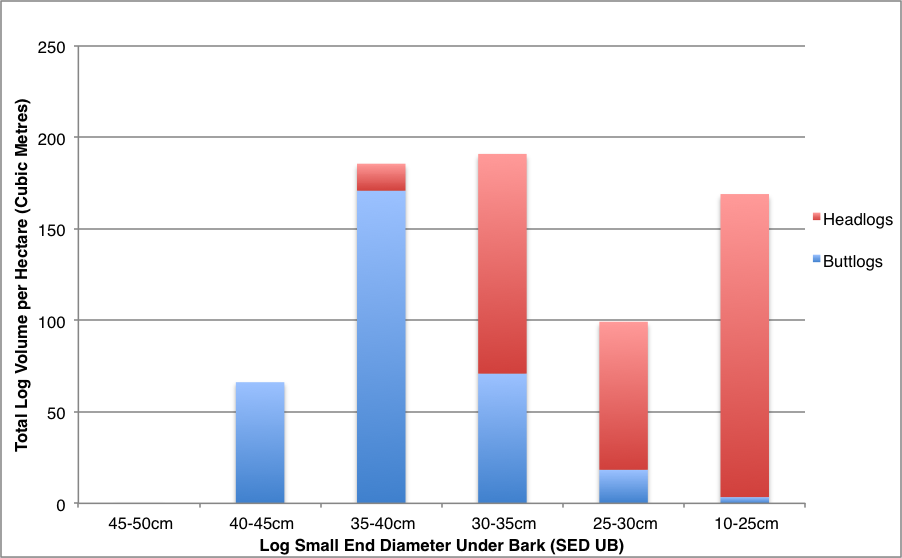 Sawn timber recovery as a percentage was found to have a statistically significant relationship (P = 0.001) with log small end diameter for the Woodmizer equipment and sample logs. The best fit was a second degree polynomial regression, presented below.

Sawmilling cost per nominal sawn cubic metre held a statistically significant relationship (P = 0.0012) with SED and the second degree polynomial regression curve revealed an optimal diameter range of between approximately 35 cm SED and 42 cm SED for this equipment. The relationship is presented below. 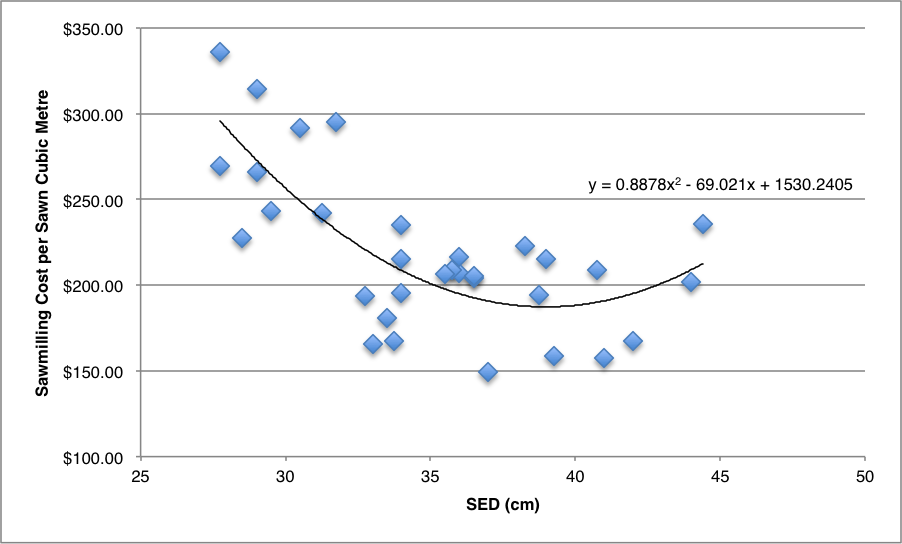 Product nominal lengths and widths produced from unpruned headlogs are presented below.

Results from processing logs into sawn timber products are presented as sawmill costs, drying costs and processing costs, each process being independent but contributory to overall product costs and thus residual value.

Drying cost estimates per nominal sawn cubic metre were $202.28 and steam reconditioning costs were estimated to be an additional $30.00.

Machining costs included both a fixed cost per nominal cubic metre of production plus a variable cost per lineal metre (for all widths) of production:

Volume of production influences costs per unit of volume output. Annual production volume estimates for the case study sawmilling operation were based on a full time operation, or 229 days per year at 8 hours per day.

The level of defect present in sawn boards has an influence over log residual value. Defect was quantified and categorised during grading and is presented below as percentages of nominal sawn timber recoveries for each of the two grading methods used, both including and excluding collapse defect.

Cost and revenue estimates were produced for each plot log from predictive models based on sample log data.

Revenues at the log level were calculated as the sum of board prices per log for each grading and pricing method. The sample log data showed no statistically significant differences below the 5% threshold between sawn timber revenue from the sample logs according to log SED’s (see below).

The relationship between sawn timber revenue and SED, averaged between grading and pricing profiles, is presented graphically below, including and ignoring collapse defect. 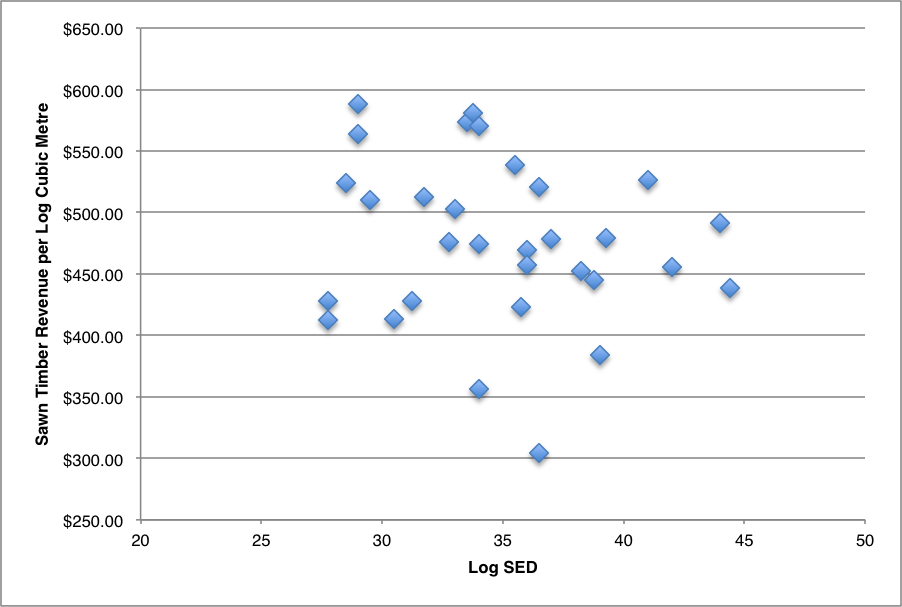 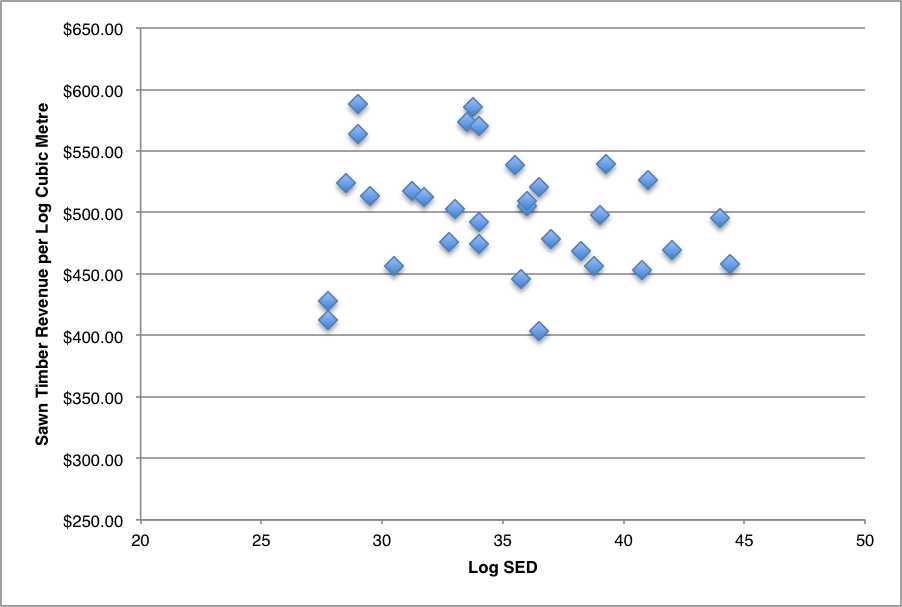 Differences according to log position were significant only between log 1 and logs 2-5. There were no significant differences between all log positions under the scenario where collapse defect was ignored (i.e. assumed to have been reconditioned). Sawn timber revenue per log cubic metre (based on SED) for each scenario presented below.

Processing overhead cost at 10% of sawn timber revenue averaged $21,760 per hectare between grading and pricing scenarios. 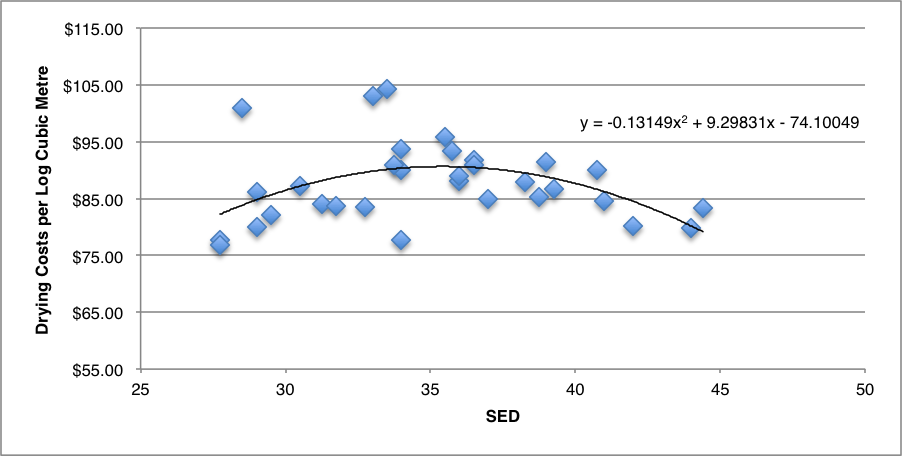 Based on a 15-year rotation and a discount rate of 8.5%, residual values per hectare for each pricing and grading scenario are presented below.

Revenue from secondary products (pulpwood, slab firewood and sawdust) are presented below as year 0 cash flows.

Growing costs and harvest/transport costs per hectare, discounted to year 0, are presented below, along with gross payments totalled to year 15.

Based on a 15-year rotation and a discount rate of 8.5%, net present value per hectare for each pricing and grading scenario is presented below.

Log physical characteristics varied according to log position in the tree and a number of relationships were evident. These are presented because of the potential for these to influence log residual value if sawn for solid timber.

A single board sample collected from longitudinal mid-position from each log was tested for basic density. The relationship between density at test (average 11.77% moisture content) and log position is presented in Figure 16. Statistically significant differences were found between log 1 and logs 2 and 3 with a P value for log position of 0.013.

Density at test according to log position from single sample tests. 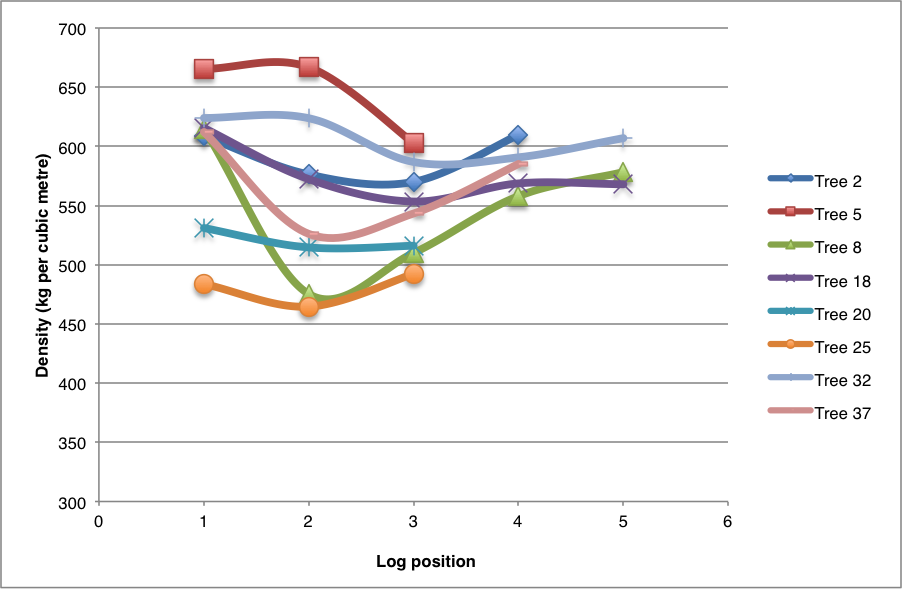 The test samples were also tested for hardness. The relationship between hardness and log position is presented below. Statistically significant differences were found between log 1 and log 2 with a P value for log position of 0.0122, suggesting lowest hardness in boards from log 2.

Hardness according to log position from single sample tests. 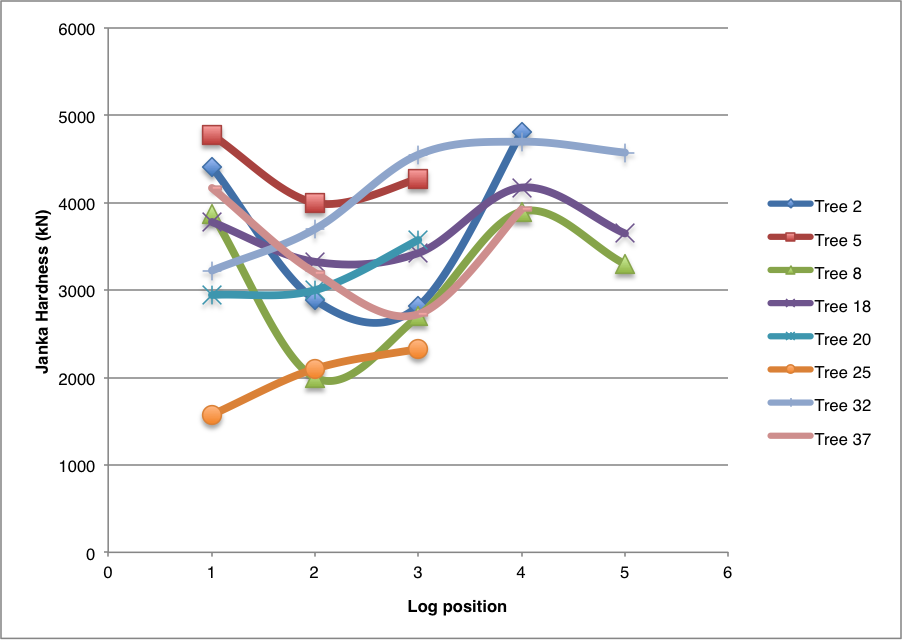 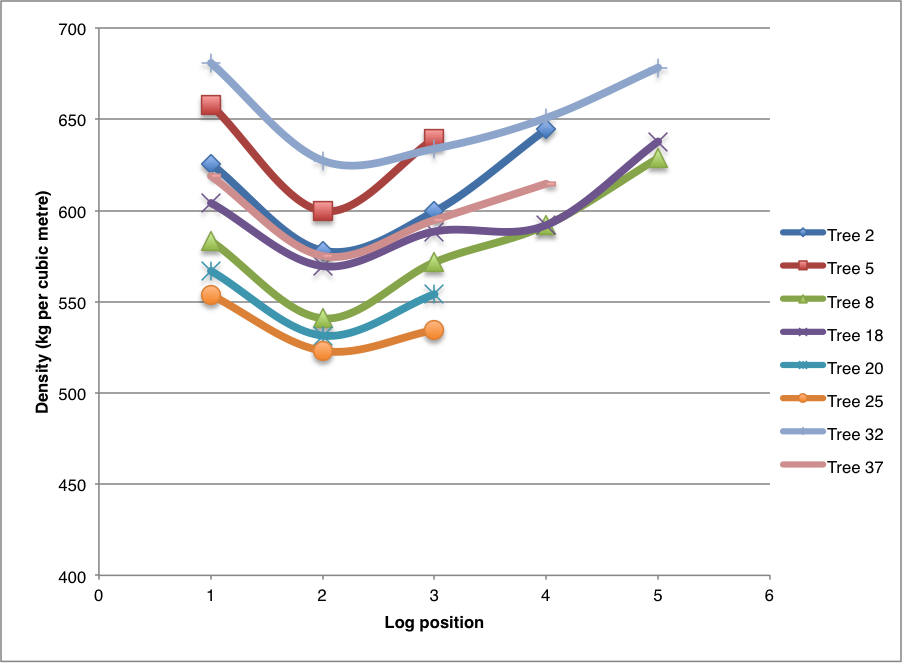 Long term movement in service according to log position. 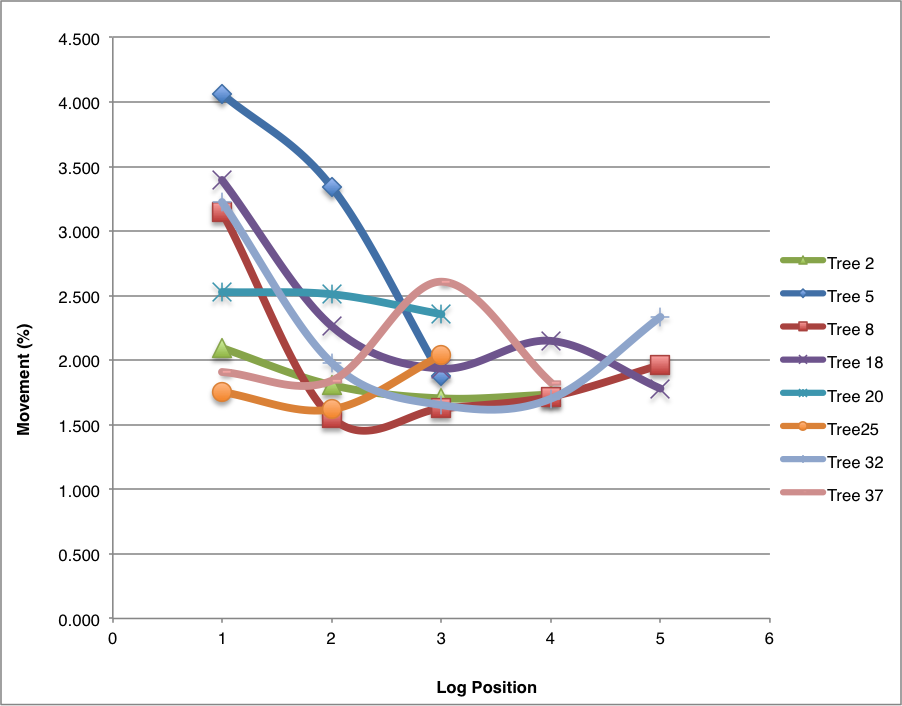 Log position was found to be important in determining levels of defect and drying degrade. The five figures below present percentages of defect levels from all sample boards according to log position.

Level of end-splits present in boards according to log position. 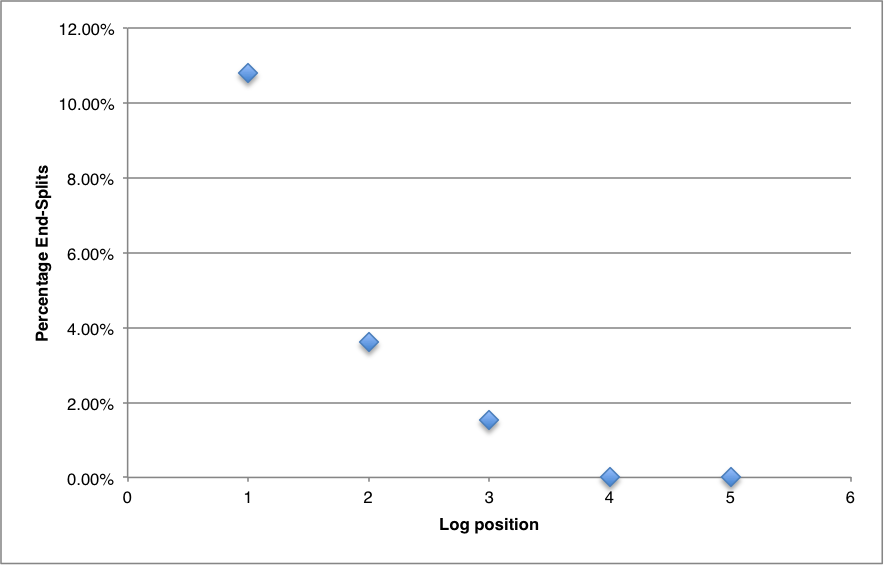 Surface check levels on profiled product as a score.

Percentage of knot defect in all boards, graded to Australian Standards. 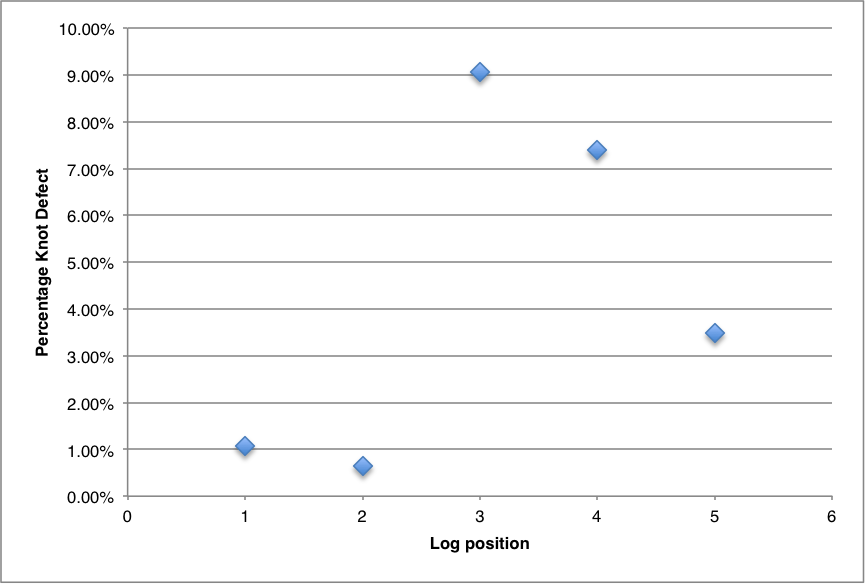 Percentage of board volume as defect caused by collapse. 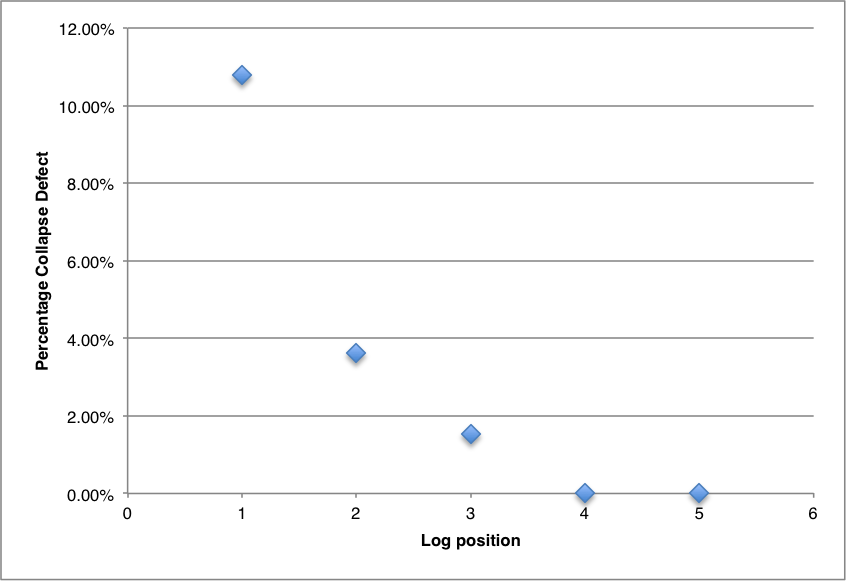 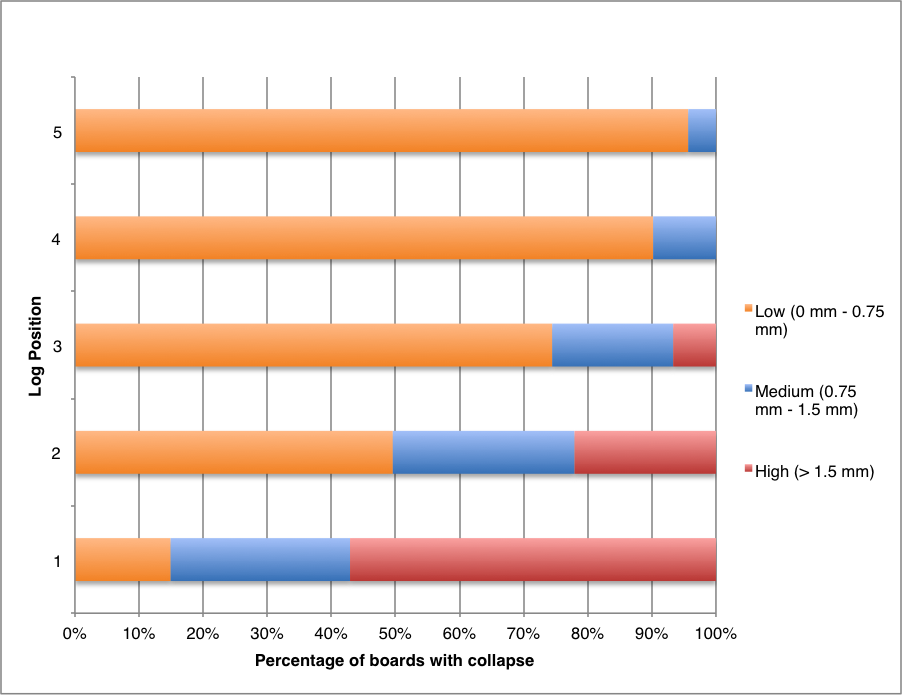