Whilst in Tasmania during December 2015 I had the fortuitous opportunity to visit Newood sawmill near Huonville at the invitation of mill manager Josh Turnbill. This mill was set up around 2004 specifically to efficiently saw the natural regrowth eucalypt resource in Tasmania. The rotation length for the naturally regenerating species (primarily E. obiqua, E. regnans and E. delegatensis) is about 60 years to produce logs suitable for this mill, which utilises twin bandsaws and twin blade edgers to deal with the high levels of tension present in regrowth logs.

I'm very grateful to Josh for showing me around the mill, which is an excellent example of using technology to overcome issues with cost-efficiently producing high quality sawn product from small-diameter eucalypt logs. Log diameters vary considerably, with the optimum being between 40cm and 50 cm, with logs down to 30 cm SED being sawn cost-effectively and with a focus on quartersawn production.

Production is approximately 10 cubic metres of sawn lumber per hour and 13,500 m3 per year. This comes from about 40,000 m3 of logs. The aim is to increase throughput to 48,000 m3 of logs per annum from a single shift operation with approx 17 workers.

Average sawn recovery is 34% from an average log small end diameter of 43 cm. Recovery is up to 45% with logs over 50 cm SED.

This sawmill is one of the most advanced setups in Australia for sawing regrowth resource and was commissioned in 2004. Approximately half the product is sawn to 19 mm green thickness, with the other half sawn to 28mm thickness. Nominal sawn widths are mostly nominal 2" - 8". A new product line being trialled is 38 mm thickness and a small amount of 76 mm x 38 mm battens are currently being produced. 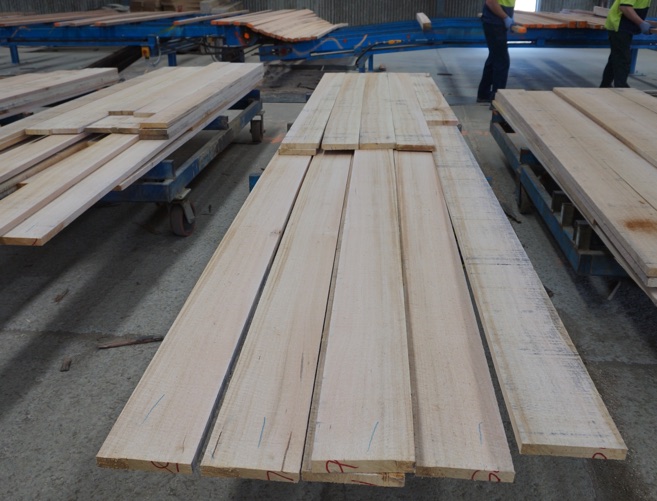 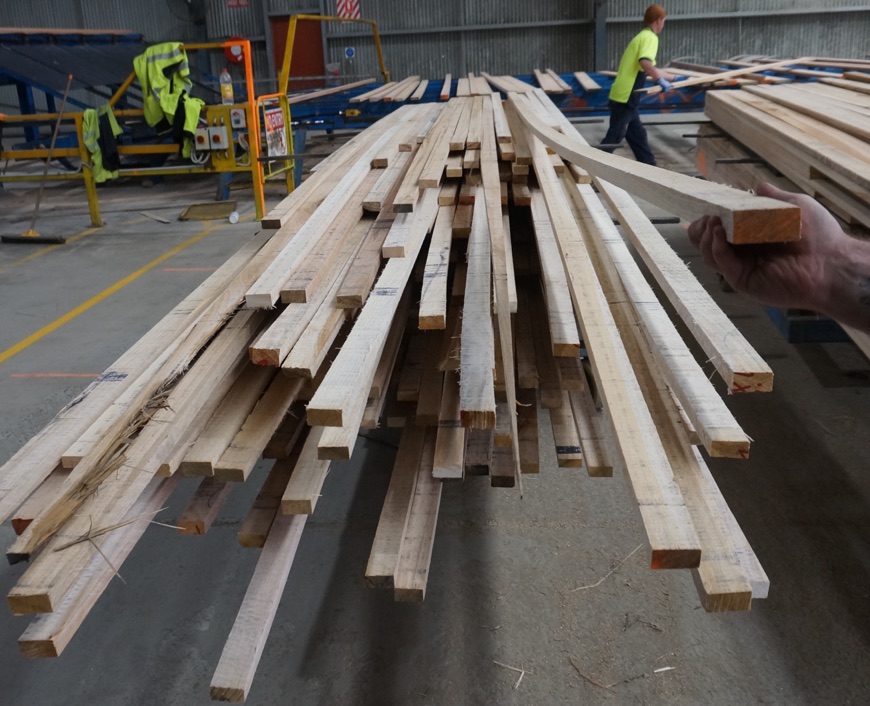 Narrow width quartersawn product is very popular in the market, this is 56 x 28 mm greensawn product.

Climate Change: from a Protest to a Movement

We dread the horror documentaries on climate change. "This is what is happening. If we don’t do something about it, these are the consequences." It has the effect of stunning us. It’s better to put our head Head in the sandunder a rock. It’s better to believe that the big powerful interests actually care about our future. Let’s move on to other things and just have faith.

Naomi Klein’s documentary This Changes Everything, played a completely different tune. It was a film of hope: "What if Global Warming isn't just a crisis.  What if it is the best chance yet to build a better world.  Change, or be changed."

We can make a difference. And no, we cannot trust the powerful interests, because they think in the blind alleys where short-term finance mugs wisdom.

Al Gore’s An Inconvenient Truth was of the horror variety. It went into what was happening, and the danger of threshold effects tipping our global system into some bleak beyond. Remember the frog heating up in the Frogs in hot waterbeaker, seemingly oblivious to its eventual fate until … Al Gore rescued him from the beaker. “It is important to rescue the frog,” he said, to the amusement and nervous relief of the audience, released from witnessing a cooked amphibian. They got the point though. We are the frog. We risk much by waiting for that point where our life support system collapses.

Naomi Klein starts her documentary stating how bored she is with struggling polar bears and receding glaciers. She didn’t mention frogs. Oil lobbyKlein knows this horror ground is covered. She knows that there is now no serious dispute about the warming climate, other than from the oil lobbies that continue to fund the deniers.

Klein focuses on response: what to do; where to focus. Klein’s genius is to do two things. First, she takes us deep into cause. Not just the immediate cause – the burning of fossil fuels and the unscrupulous power of corporations undermining democracy – but many layers deep into the way we in the ‘Modern’ West see the world. Four hundred years ago, much of the Alan Watts you come out of this worldWestern World lost its connection to place. We started seeing the world as a set of resources, something for us to dominate and control. We lost our humility, and saw ourselves as above the eventual banquet of consequences. Klein challenges the very core of what it is to be human. We are not disconnected. We belong. We stand together as a community, and within our land, or we perish.

Her second piece of genius was to take us to places and deeply embedded communities where there was an immediate threat. Their connection was obvious. Their threat was on the door step. There was no longer any room for apathy because the people all around them, their children, their elders, mordor-like-tar-sandswere very evidently the frog on the point of no return.

Immediacy. The land to which you belong being destroyed, sacred grounds desecrated, the ripping apart of the tar sand earth of the Crow Nation of Canada for the creation of Mordor and the gain of some far way corporate financier.

Klein takes us around the world; to a Greek community fighting mining interests, to a Montana ranch and the Cheyenne Nation fighting yet more oil interests in pursuit of a life within the land; implacable Indian protestors, channeling Gandhi, passively resisting the march of coal fired power plants destroying the commons upon which these local people depend.

The groundswell of dissent was from the bottom up. It was their communities and commons that was being lost because of a way some viewed our earth and our communities where extraction and profit dominated any ethos of care or justice.

There are those that say that marches and rallies do nothing. Yet every significant social change has started from small beginnings by people concerned and courageous enough to act on principle.

It seldom starts with many, but there is always some trigger that shifts the momentum from a narrow protest to a wider movement. People wake up from apathy and despair, and realise that they can change things, and the momentum grows.

Rosa Parks refused to give up her SelmaMontgomeryseat to a European in Montgomery, Alabama, was arrested, and the outrage at the injustice saw first the bus boycott, and then a growing movement of principled and decent people, until President Johnson was forced to act after the events of Selma.

Unjust conventions cannot hold when the people realise that they stand for what is right and have the power to change things.

We face a similar injustice with climate change: the clear threat of the loss of 8000 homes and 76 businesses in Napier alone within 50 years is the tip of the iceberg of consequences. We cannot wait 50 years to do nothing, because stopping climate change is like stopping a supertanker with a fleet of rowboats, requiring international coordination and commitment. It will take time.

The Paris talks of early December are critical, and standing up for right and the future of our world is the act of a citizen.  Around the world the Earth to Paris day of November 28th is delivering a message.  This is a test of the relevance of government; of the relevance of having the lobbying corporations in the rooms where policy is made.  Corporate smile.jpg

If we get the same old corporate-government speak, and the same platitudes to appease the people they disdain, while the extractors continue to extract for their selfish and short term gains, then that question will have been answered.

We can create a movement to change this world, or our Earth will change us.