Causal organism
Dothistroma septosporum (Dorog.) M. Morelet.  Until 2004 there was only one species of Dothistroma known to cause needle blight of pines world wide but molecular analysis has indicated that there are two separate species, D. septosporum and D. pini Hulbary. The New Zealand population, which was called D. pini, is now recognised to be D. septosporum.

Type of injury
Death of needles. 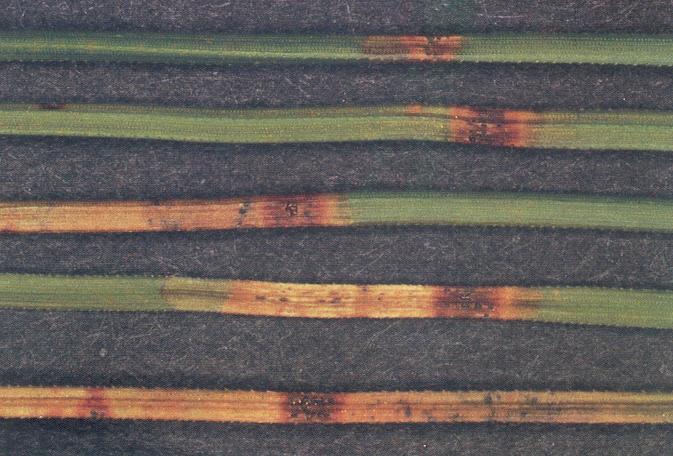 Distribution
The disease has been recorded in nurseries in all parts of New Zealand.

Disease development
Seedlings become infected by fungal spores from Dothistroma fruiting bodies on diseased needles. The infection process may take place at any time after emergence of the seedlings, whenever environmental conditions are suitable. Spores originate from diseased trees outside the nursery, diseased seedlings growing in the nursery (particularly 2/0 seedlings which have been inadequately sprayed), or from infected plant debris carried into the nursery. The spores are liberated under wet conditions and distributed by water splash. Spores landing on a pine needle germinate and penetrate the needle through the stomata. The fungus then grows a few millimetres through the needle and produces a toxin called dothistromin which is responsible for the characteristic red bands. Soon after the appearance of the red band, fruiting bodies are produced which erupt through the surface of the needle. The period from the time of infection to the appearance of the red bands and fruiting bodies may vary from as little as 2 weeks to as long as 6 months, depending on environmental conditions. Once the disease signs have appeared, the infected needle usually dies and turns brown. Generally only the lower needles are affected (Fig. 2). If seedlings are left to over-winter in the nursery, infected needles may fall off. 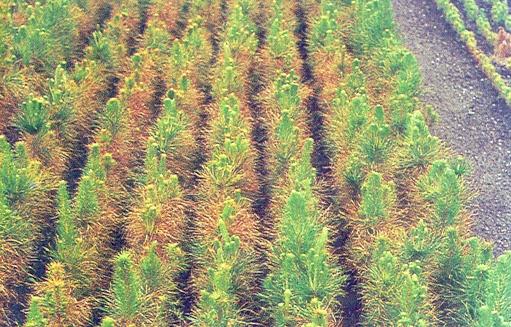 Economic importance
Severely infected seedlings may become chlorotic and even die. However, disease levels of this magnitude are rarely encountered. Considerable defoliation may occur on 2/0 nursery stock which has been infected in the first growing season, particularly if prophylactic spraying has not been undertaken.

Control
Disease levels in nursery seedlings must be kept as low as possible to minimise the rate of disease build-up after planting out on the forest site.

Sound hygiene practices, such as the removal of old unwanted stock and removal of inoculum sources, are important.

Disease control is achieved by spraying with copper products; copper hydroxide, cuprous oxide or copper oxychloride. Frequency of application is related to environmental conditions. Where plants are at high risk of infection throughout the growing season spraying should commence on cuttings and seedlings in October or when seedlings are about 2 cm high, whichever is later, and continue monthly until the end of March. In other locations applications may not commence until mid-summer and subsequent applications will depend on rainfall. Apply 350-500 gm a.i. in 500 litres of water per hectare. For example: 1kg Kocide 2000 DS product or 1kg Copper oxychloride product per hectare, 1.25 l Champ Formular 2 Flowable (Kocide 2000 DS contains 350 g/kg copper; Copper oxychloride contains 500 g/kg copper; Champ Flow contains 334.5 g/l copper).

Because of the dense growth that develops in stool plants after cuttings have been taken achieving chemical penetration may be difficult. Hence some nursery managers may use a higher rate of copper on stool beds than on beds of seedlings or cuttings.  For example: 2.5kg Kocide 2000 DS product in 500 litres of water per hectare

Note: In nurseries situated in cold areas, spraying with copper oxychloride under frosty conditions often results in browning and death of the lower needles of the seedling because of copper phytotoxicity. Copper hydroxide is also listed as a bacterial ice nucleation inhibitor and may therefore inhibit development of bacterial dieback in areas prone to the disease.