Needle cast caused by Cyclaneusma minus

From Scion publication Forest Research Bulletin 220,
An Introduction to The Diseases of Forest and Amenity Trees in New Zealand,
G.S.Ridley and M.A. Dick 2001.

Disease development: Cyclaneusma minus does not usually produce fruit-bodies on infected needles until they are shed but fruits readily on the fallen needles (Fig. 26, 27). Fruit-body production occurs throughout the year, with the greatest numbers produced during autumn and winter. The ascospores are wind dispersed and are forcibly ejected from the fruit-bodies during periods of rain. Ascospore release begins after about 2 hours of rainfall, reaches a peak in the fifth hour, and then the numbers released gradually decrease. Newly flushed foliage is resistant to infection for approx 6 months and does not become infected until about March. Infected needles begin to show the typical yellow mottling characteristic of the disease by July or, in particularly favourable years, even earlier (Fig. 28). They turn brown and are normally cast in early spring. There are two peak periods of needle cast in P. radiata — from April to June, and from September to December. In years which are very favourable for infection by C. minus these two periods tend to merge together. 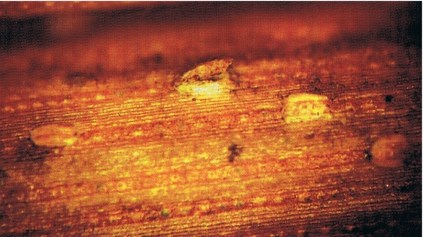 Fig. 26: Fruit-bodies of Cyclaneusma minus on a Pinus radiata needle (red colouring is due to the photographic effect) 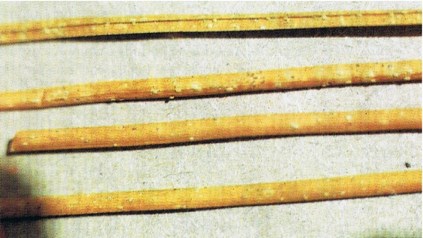 Fig. 27: Yellow needles of Pinus radiata with Cyclaneusma minus fruit-bodies 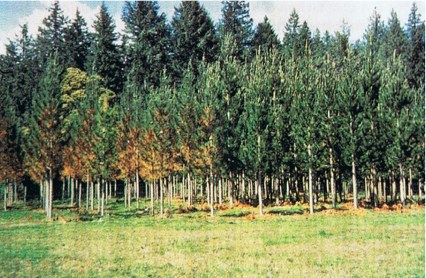 As with Dothistroma pini, infection by C. minus is influenced by temperature, duration of leaf-wetness period, and the amount of inoculum available for infection. There is always a very large amount of potential inoculum available on the forest floor — the number of fruit-bodies capable of producing ascospores ranges from 100 000 to 180 000/m2 between May and August. Millions of ascospores are released from these fruit-bodies after a sustained period of rainfall of 2-5 hours. Rainfall of this duration also provides sufficient needle wetness for infection to occur. Experimentally it has been shown that the temperature range over which C. minus infection can take place is from 10° to 25°C; therefore, severe needle cast could be expected after a wet and relatively mild autumn.

Young plants (<3 years old) are resistant to infection by C. minus. In the field, infection rarely occurs before the plants are about 4 years old and it usually does not become obvious in stands less than 6 years of age. The symptoms are most apparent in stands aged 9-20 years; older stands, although not fully resistant to the disease, are not usually severely affected.

Economic impact: In a trial in Kaingaroa Forest in which average crown infection over a 6-year period was 9% for healthy trees and 59% for diseased trees, the difference in volume between diseased and healthy trees was 100 m3/ha at age 15. An average disease level of 80% led to a reduction in volume increment of 60%. Losses of 71 m3/ha were predicted at the end of the rotation, assuming that 50% of the crop trees were affected by the disease.

Control: Aerial applications of fungicides have not been successful, and although some success has been achieved by injecting trees with systemic fungicides, this method is not suitable for forestry application. The only two practical ways of controlling cyclaneusma needle cast are (a) by establishing plantations of resistant trees and (b) by using resistance to the needle cast as the main criterion for selection when carrying out thinning operations.

Resistance to cyclaneusma needle cast is heritable and trees with high needle retention have been selected for inclusion in the tree-breeding programme. In a trial established in Kaingaroa Forest, plots received their first thinning at ages ranging from 4 to 9 years, with selection based on susceptibility to cyclaneusma needle cast. As many recognisably diseased trees were removed as was permissible. All treatments received a final thinning at age 10, using the same selection criterion but maintaining final stocking. At age 14, the plots that were thinned at 4 and 5 years, when it was too early to identify disease-susceptible trees, had an average crown infection level of 34% (disease severity exceeded 40% in 41% of the trees). Those thinned at 8 and 9 years had 12% crown infection (severity over 40% in only 6% of the trees). At age 14, the trees in the plots thinned early were smaller (36.0 cm diameter) than those in plots thinned later (37.6 cm diameter) and this difference between treatments is expected to widen as disease levels are likely to be high in the susceptible trees until about age 20.