Forest Pathology in New Zealand No 11. 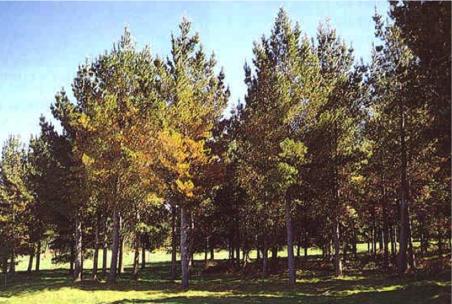 Diagnostic features
In spring (late August/September), foliage over all or part of a tree crown turns a mottled yellow-green, then brown. Most infected needles prematurely shed by December (Figures 1 and 2).

Distribution in a stand not uniform, with symptomatic and unaffected trees being scattered through the stand. 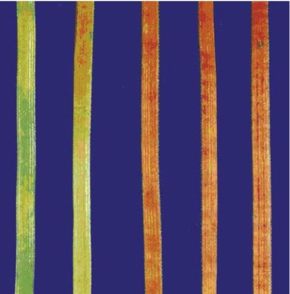 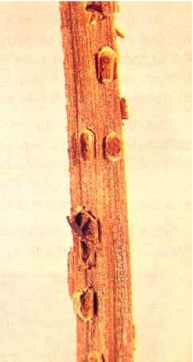 Figure 3 - Fruiting bodies of C. minus on Pinus radiata needle.

Caution: Not all foliage yellowing is caused by Cyclaneusma (Figure 4) - magnesium deficiency in particular can produce similar symptoms. However, yellowing from magnesium deficiency begins only at the needle tips; all needles within a fascicle, and all fascicles within a flush of growth, are affected to a similar extent, whereas Cyclaneusma affects needles to different degrees. 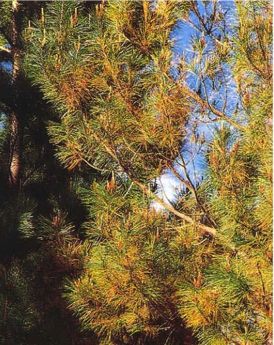 Distribution and severity
During 1983-85 and in 1995 and 1996, aerial stand-by-stand surveys of forests throughout New Zealand were carried out to obtain information on the variation in disease severity between regions and years. Forests were selected to cover a range of management regimes and climatic conditions.

The disease was present throughout New Zealand, but there was a considerable variation according to location. East Cape forests were severely infected in 1984 and 1985. Severe outbreaks were recorded in Northland in 1985, and the central North Island in 1985, 2005 and 2006 (Table 1). Few trees were severely affected in the South Island (apart from Otago in 1984) or Hawkes Bay. 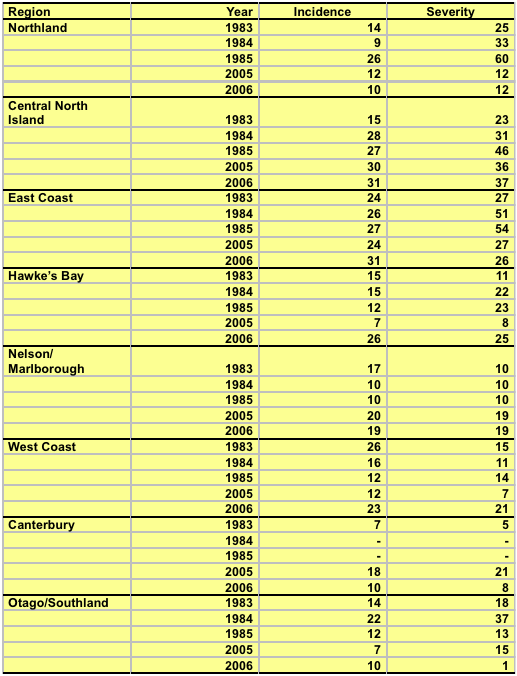 In the forests surveyed from 1983 to 1985 mean disease incidence and severity was 18% and 27%, respectively. Some individual locations displayed higher severity - for example in 1984 and 1985, 24% and 20% respectively of the trees in one East Cape forest had over 50% of the crown affected. The disease was most severe in trees between 6 and 20 years old, where average disease severity exceeded 40% in approximately 10% of the trees. Trees younger than 6 years had little disease. Trees older than 25 years had a high incidence (over 80% showed some infection), but low severity (77% had only trace levels of the disease).

Overall, disease levels were lower in 2005 and 2006, where disease incidence and severity averaged 20% and 22%, respectively. It is likely that tree breeding has eliminated highly susceptible genotypes from the breeding population.

Microsites that are prone to fog and mist are favourable for the disease. The phenomenon of increasing disease with increasing altitude has been recorded in forests in Northland, East Cape, central North Island, Wellington, and Otago.

Disease development
Cyclaneusma spp. do not usually produce fruiting bodies on needles before they are shed, but fruit readily on fallen needles. Spores are ejected from fruiting bodies during periods of rainfall, with maximum release occurring at least 3 hours after the onset of rain. Spore numbers peak in autumn and winter, although spores are produced throughout the year. Newly flushed foliage is resistant to infection until it is older than six months.

Infection starts in autumn when the current season's needles are about 8-9 months old and spores are most prolific. Many of the infected needles show the mottled yellowing and banding typical of the disease by the following spring, and are cast by summer, although some infected needles remain on the tree to be cast the following autumn when they are about 20 months old.

Infection can take place over a wide range of temperatures (10 - 25oC), but the weather in spring and summer when the current year's foliage is resistant to infection, and spore numbers are low, cannot affect the severity of the disease. Severe outbreaks can be expected during spring in years when winter daily maximum temperatures are often higher than 10oC, and rainfall frequently exceeds 5 hours duration.

Trials have shown that young trees (less than 3 years old) are completely resistant to infection, and symptoms do not usually appear until trees are about six years old. Trees older than 25 years are commonly affected but only very lightly.

Economic importance
Cyclaneusma needle cast is one of the most significant forest diseases in New Zealand.

In 1977, a trial was set up in Kaingaroa Forest to find out whether repeated defoliation by Cyclaneusma leads to measurable growth loss. A 9-year-old stand was selected in which approximately 50% of the trees were diseased. Twenty pairs of final-crop trees were selected, each pair consisting of one apparently healthy and one heavily diseased tree. Disease severity was assessed annually over a six-year period, after which the sample trees were cut down, and stem volume increment between time of establishment and time of felling was estimated by measuring growth rings at each internode.

At age 15 the healthy trees had almost 100 m3/ha more stem volume than the diseased trees (Figure 5). When volume increment was related to disease severity it was found that an average disease severity of 80% over several years would lead to a reduction in volume increment of 60%, on an individual tree basis (Figure 6). The disease did not significantly affect height growth.

Growth data from this trial were projected to the end of rotation at age 30 using Kaingaroa Growth Model 2, and projected stand yields were run on program SILMOD to show expected revenue after clearfelling. A total volume loss of 71m3/ha was predicted for 50% disease severity in 50% of crop trees. This would result in a net revenue reduction of $3200/ha, assuming prices of $147, $25, and $15/m3 for framing timber, pulp, and chip residue respectively. At an average of 50% disease severity, each 10% increase in incidence would be expected to reduce stem volume by 10-14m3/ha, and net revenue by $600-$700/ha.

In 1994, another series of trials to examine the effect of Cyclaneusma needle cast on tree growth was established in Northland, Auckland, East Cape, Wellington, Nelson, and Otago. At each location, healthy and diseased trees were assessed and measured for seven years. Disease significantly reduced diameter growth and the relationship between disease and growth did not differ between regions. An average disease level of 60% resulted in a 50% reduction in diameter increment (Figure 7).

Using disease levels assessed during the 2005 and 2006 surveys and growth loss estimates derived from the studies above, the financial loss attributable to Cyclaneusma needlecast over the P. radiata estate is estimated to be in the order of $40 million per year. 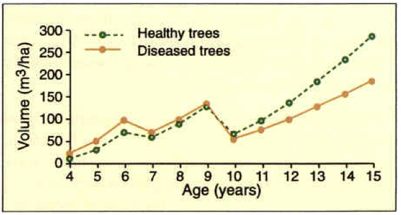 Figure 5 - Annual volume (m3/ha) of healthy and diseased trees from age 4 to 15. Volume
reductions were due to thinning-to-waste operations at age 6 and again at age 9. 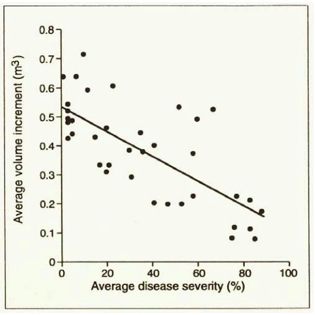 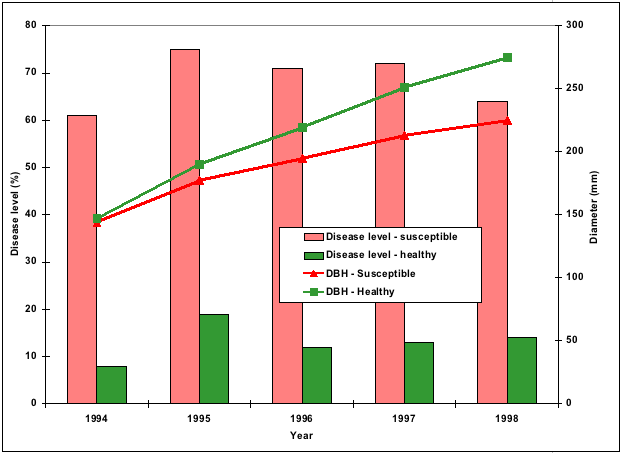 Control
Disease symptoms and needle loss can be reduced by injecting trees with a carbendazim fungicide. A 30% reduction in disease severity has been achieved, but the fungicide is expensive, and it is not economically possible to inject individual trees in a forest. Aerial spray trials were carried out to evaluate the effectiveness of three fungicides. Six successive applications of Dodine resulted in a 15% reduction of disease severity and an 11% reduction of disease incidence, a return that did not justify the high cost of spraying ($250/ha).

The best hope for control may be to identify and cull susceptible trees (Figure 8). A trial was set up at two sites in Kaingaroa Forest to examine the effect of selective thinning on the incidence and severity of Cyclaneusma needle-cast. Plots were thinned annually, starting at age 4 for the earliest thinning regime, up to age 9 for the latest thinning. (Stands usually receive a first thinning at age 4 or 5) was based on disease severity, the most severely diseased trees being removed. At age 10, all plots were thinned to 250 sph, again using disease severity as the major selection criterion. 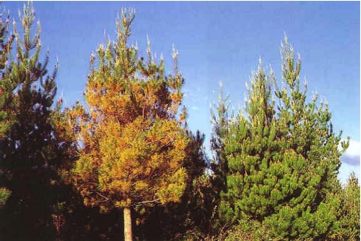 Figure 8 - This susceptible tree was chosen to form part of the final crop. Growth loss studies show that Cyclaneusma significantly reduces volume increment, so a neighbouring healthy tree should have been selected instead.

Disease incidence and severity remained low at one site, and were consistently higher at the other. At the site with low disease levels, trees were smaller in diameter at age 13 in plots where thinning was delayed to ages 8 and 9 because of increased competition, so there was little benefit to be gained by modifying thinning strategies.

On disease-prone sites, delayed thinning had enabled successful selection of resistant trees and resulted in improved final-crop tree growth, in spite of an initial increment reduction due to suppression. Delayed selective thinning could be successful on the East Cape, in Northland, Otago, and parts of the central North Island which were identified as high risk sites during the aerial surveys. However, some issues such as what level of training is required and how delayed thinning Interacts with pruning selection need to be resolved before selective thinning can be used operationally.

Resistance to Cyclaneusma is heritable, and elimination of trees with poor needle retention has been included in the tree breeding programme for many years. Results to date are promising, and stock that is now available has favourable needle retention ratings.

Remarks: Cyclaneusma needle-cast can be damaging on sites favourable to the disease. It is most severe in trees aged between 6 and 20 years, and therefore affects final-crop trees during the period of greatest growth potential. Stem volume loss on an individual tree basis is in the order of 60% for disease severity of 80%. On a stand basis it is estimated that the average volume loss in the forests surveyed will be 5% per annum, but on high risk sites the losses are likely to be greater.

The best prospects for control at disease-prone sites appear to be selective thinning of infected trees. Elimination of highly susceptible genotypes from the breeding population has resulted in lower disease levels compared with those recorded in the 1980s.