When James Trounson emigrated to New Zealand from Cornwall in 1862, he moved to Northland and set about milling trees and clearing land for farming. What distinguished him from most of his fellow settlers was recognition of the unique quality of the forests that were disappearing. In an act of imagination and generosity that was far ahead of his time, he decided to do something about it. With support from the government of the day he began to acquire adjoining blocks of undisturbed kauri forest to be retained for posterity.

The outcome, many years later, was Trounson Park. At 586 hectares in extent it is a convenient size − big enough to support a viable ecology, and small enough to be managed. Management has included an aggressive predator control programme, which entitles it to be classed as a mainland island. The park has extensive visitor facilities and a well maintained track which includes boardwalks in sensitive areas.

The experience of visiting a kauri park is often compared to entering a cathedral. This is an apt description, although this and other forest cathedrals like now have an added twist. On entering and leaving the cathedral your footwear is subject to a special ceremony, the first indication that all is not well inside. Shoes must be cleaned and scrubbed, and then anointed with trigene, a potent disinfectant.

The giant kauri soon come into view, singly or in groups. Most appear even-aged, perhaps 600 to 800 years old although I am guessing and they might be older. These are likely to have first appeared after a major disturbance, a cyclone perhaps, which flattened the previous forest. Scattered among them are trees that are much bigger and older, presumably survivors from a previous generation.

Much of the visual impact of a kauri forest is the contrast between the brutal size of these monsters and the delicate understory beneath them. At first glance it is an uneven contest between strength and fragility, yet both form part of a key ecological linkage. This is how much of Northland must have looked since the trees emerged from their ice age sanctuaries more than 10,000 years ago in a warming climate and began their southward migration. However there is now trouble in paradise.

Viewed from the boardwalk, the first signs of trouble are giant slabs of bark lying at the base of some of the trees. When you look up, the trees have undergone a sinister

transformation. These are white ghosts. Denuded of their bark they resemble towering pillars of marble, and are just as inert. Individual trees have been singled out apparently at random among the living, although the living are on borrowed time. Among them are groups of affected trees, all dead.

This is kauri dieback, an infection caused by an organism so small that 10,000 of them can fit on the head of a pin, yet capable of destroying trees that were growing here before the first people arrived. It is expected that the remaining kauri in the park will succumb, and when that happens, what was once a cathedral will become a graveyard. The trees will stand for some time before they crash, but when they do, unlike the previous cycles of death and renewal, they will not be replaced.

Before entering the park we attended a talk on kauri dieback, and I will summarise the main points. PTA Phytopthora taxon agathis (now Phytophthora agathadicida) is a water mould organism, resembling a fungus although not related to fungi. It exists in two forms.The dormant oospores are resting spores.They have been shown to survive for several years and may survive for much longer.

The zoospores are the active form. Under the microscope these resemble minute tadpoles. They can migrate through damp soil for two to three metres a year. They invade the tree by entering root hairs near the surface and travel to the lower stem, where they destroy the vascular cambium, disrupting the vascular system. They remain confined to the lower metre or so of the stem and slowly circumnavigate it, effectively ring-barking the tree.

Trees can be infected for some time before showing signs of infection. It is not known how long it takes to kill a mature kauri but seedlings can be destroyed within a few weeks. The first signs of infection are leaf fall, canopy thinning, and resin bleeding near the base.

PTA was first noted on kauri on the Great Barrier Island in 1972, but is now known to have been present much longer. It is thought likely that it arrived in New Zealand in the 1950s from the Pacific, hitch-hiking on military equipment that was repatriated after the World War II. It then took hold at Waipoua and spread to multiple sites with seedlings that were sent out from the Forest Service nursery at Waipoua.

The disease is now widespread through the natural range of kauri and continues to spread. At Waipoua it has been located within 500 metres of Tane Mahuta. It has recently been found on two sites in the Coromandel. At Whangapoua, an isolated location in the Coromandel, several hundred trees are affected, many of them located near lines used in the past by possum trappers. Among the Hauraki Gulf islands, Great Barrier alone is affected to date. Here I have to admit a vested interest. On Waiheke Island I have groups of kauri located within a few metres of a popular walking track. This is used by thousands of visitors to the island, many of them tramping groups.

Spread is by soil, common agents including footwear, machinery and feral pigs. Cleaning stations at park exits are the main agents of containment, but are sometimes ignored.The kauri park near Warkworth has now been closed to visitors and others are likely to follow. No doubt kauri will continue to survive in isolated populations from which people are excluded, but over time the experience of a kauri park may be denied to us.

There is no treatment. Phosphite, a chemical used in avocado orchards, may give short term control, but is impractical in large scale management. The search is on for trees which might have natural resistance, but to date none have been found. PTA is a specific pathogen of New Zealand kauri and related species in the Pacific and Australia are not affected.

Extensive research programmes under way offer the best hope for the survival of kauri. Studies include resistance, host-pathogen interactions and improved methods of field detection.

There is no doubt that the most significant pathogen that has been inflicted on kauri is the human predator. We have done our best to remove all traces of the species. In three waves of economic predation we have removed its by-product kauri gum, most of the standing forests, and more recently the evidence of 60,000 years of its history embedded in swamp kauri. It is ironic that with the best intentions, in an attempt to belatedly right the wrongs of the past, we appear to have now unleashed a pathogen that puts at risk what is left of the forests. 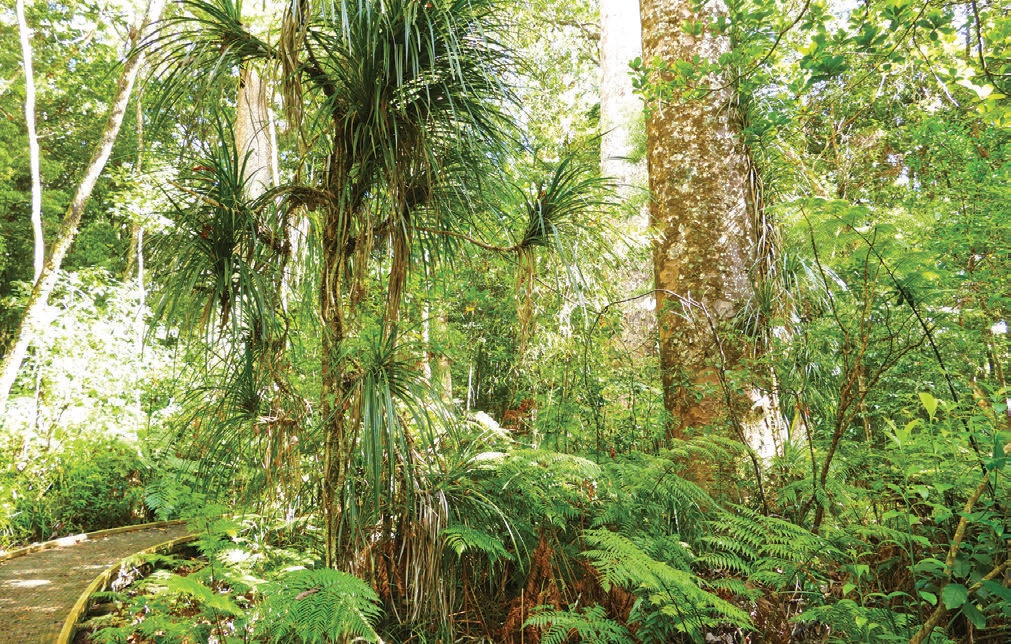