What redwood growers should know about mycorrhizae

Most plants form mycorrhizae. A mycorrhiza is an association between certain soil fungal species and plant roots. The plant gets to use the very large surface area and small diameter of the fungal mycelium, which penetrates much finer soil pores than root hairs, to absorb water and mineral nutrients from the soil. Mycorrhizal plants are often more resistant to soil-borne pathogens and in return, the fungus benefits from carbon compounds provided by the plant.

Nutrients are found in the soil in simple mineral form, for example as nitrate, phosphate or potassium ions, or in complex organic compounds bound with carbon. Soil bacteria and saprophytic fungi break down some of these organic compounds, releasing nutrients in mineral form which can be absorbed by themselves, or higher plant species. This process is called mineralisation.

It has long been known that mycorrhizae enhance uptake of nutrients as minerals, especially phosphorus. However, research in the last 20 to 30 years has shown that some ectomycorrhizae can also degrade compounds found in plant litter and obtain nitrogen and phosphorus directly from organic material, bypassing the bacterial mineralisation process.

This means they are less reliant on soil bacteria and other organisms for breaking down and freeing up nutrients from soil organic compounds. It gives EM species like pines an advantage in environments where nitrogen and phosphorus mineralisation rates are naturally slow, and the availability of these elements is limiting. As a result EM species tend to perform better than AM species. This happens under the cooler temperatures that occur at higher altitudes and latitudes or at other sites where nitrogen and phosphorus mineralisation is slow.

The important AM species in New Zealand forestry, including redwoods, tend to be restricted to warmer, lower elevation sites and more fertile soils. This is why they are commonly referred to as being site-demanding. 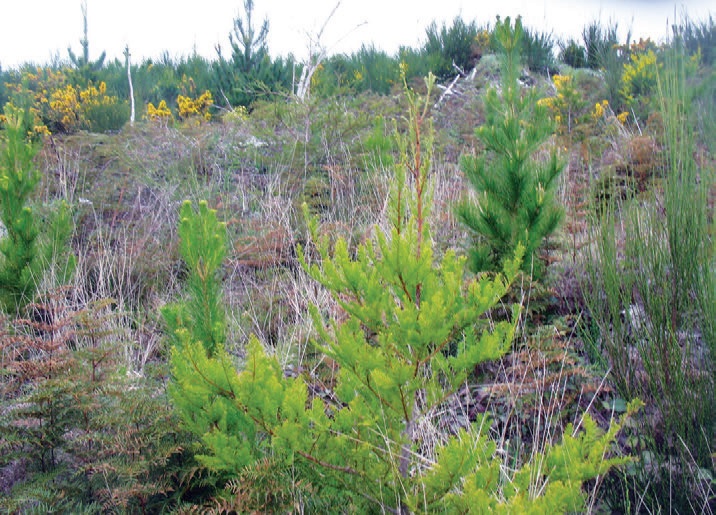 The photograph above shows spring yellow in coast redwood growing next to a naturally regenerated radiata pine at Ashley Forest. The colour difference between the species is thought to be due to their different types of mycorrhizae. The redwood is struggling to take up nitrogen in early spring when nitrogen mineralisation rates are low because the soil is still cold. This may also account for differences between green redwood trees on northern faces and yellower trees on southern faces.

The nutritional differences between mycorrhizal types have implications for siting of species at local scales as well as the broad regional, latitudinal and altitudinal scales. Nutrient availability varies across the landscapes. For example soils may be deeper and more fertile on lower slopes or in valley bottoms or at flush sites. This is where the more site-demanding AM species such as redwoods should be planted.

Mycorrhizal differences also have implications for fertiliser management. A Scion study compared the growth of radiata pine (EM) and the cypress lusitanica (AM) at 35 sites across New Zealand. This showed that lusitanica responded more strongly than radiata pine to fertiliser, the average volume responses of the two species at age four being 54 per cent and 23 per cent respectively.

The results indicate that the range of planting sites for AM species such as redwood might be extended by fertiliser application. Similarly, although unknown, weed competition for nutrients may be particularly important for successful establishment of AM species at the nutritional limits of their range. Therefore attention to good weed control may be important in extending the range of sites available.

While EM species may be able to access nitrogen and phosphorus more easily than AM species, the opposite seems to be true for potassium, calcium and magnesium. In the study mentioned above, while lusitanica contained lower concentrations of nitrogen and phosphorus than radiata pine in the absence of fertiliser, on average it had much greater concentrations of calcium and magnesium.

Growing redwoods with an EM species

An intriguing possibility that remains to be explored is the potential of growing EM and AM species in mixtures for improving nutrient availability to the AM species. Improved growth and nitrogen nutrition of AM species of Araucaria in Australia, Fraxinus in North America and Cupressus in New Zealand has been observed when these species are planted next to pines. This indicates that EM species may enhance nitrogen uptake of AM species.

Results from the Scion nationwide study provided further supporting evidence for this. Foliar nitrogen, phosphorus and sulphur concentrations in lusitanica were enhanced when growing next to radiata pine. To explore the possibility further, two trials have been set up at Hundalee Forest. Plantings of coast redwood, as an AM species, have been inter-planted with either radiata pine or Douglas fir which are both EM species, or lusitanica as a control AM species. This work is being undertaken in the Scion programme funded by FRST and partly by Future Forest Research.