As is the case with so many things in life, the obvious is often right in front of you, but for a long while you do not see it. So it was with coast redwood at our property Ashley Gorge tucked under the foothills of Oxford in North Canterbury, blessed with 1200 mm of rainfall a year.

My father, Merrell Johnston, was a keen farm forester as well as a sheep farmer, putting a lot of energy into establishing shelterbelt systems and woodlots on the 600 hectares of flats. These flats were very exposed with only a few lines of radiata planted around large 40 hectare paddocks in the early 1930s. Very little other planting was done until the late 1940s when a one hectare paddock of radiata was planted.

There were plantings around the homestead dating back to 1896, of which three short rows of radiata remain. A giant sequoia was planted in the driveway when the property was first broken up. It now has a diameter of 3.18 metres, an estimated volume in excess of 50 cubic metres excluding the branches, some of which are almost millable, and is almost as wide as it is high.

Planting for the future

Planting began in earnest in the 1950s as the flats were divided into paddocks of around 10 hectares. At this time more shelter was also established around the homestead. This coincided with Catchment Board subsidy money becoming available for soil conservation purposes, especially for tree planting at the mouth of Canterbury’s river gorges.

My father’s objectives were − 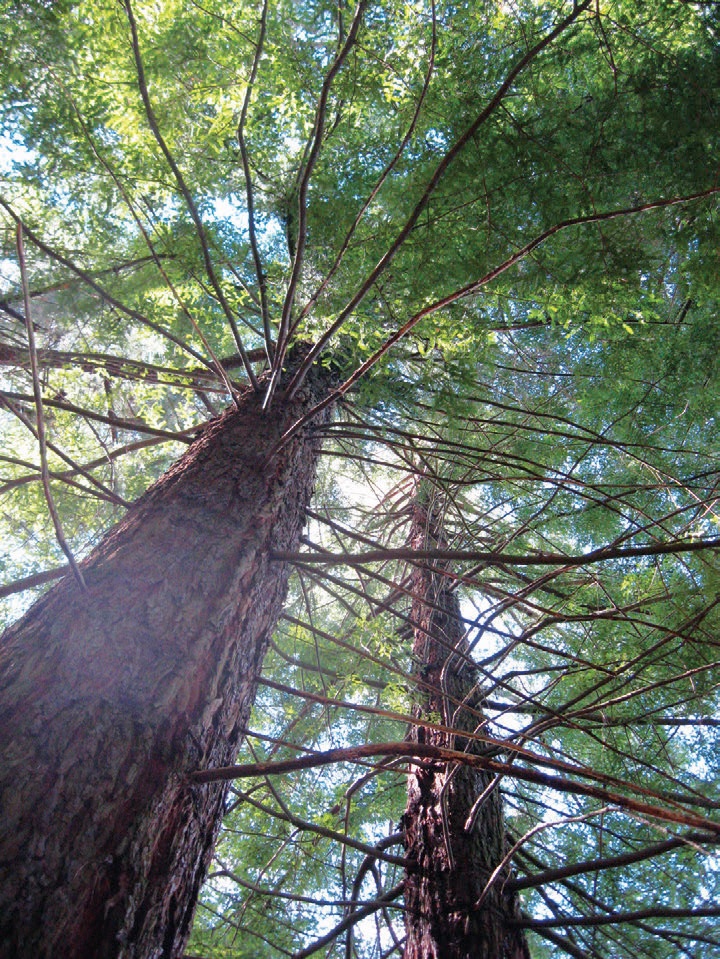 Merrell Johnston was one of the pioneers of multiple species shelterbelts, using one or two rows of radiata on the leeward side and a complimentary species on the windward side, planting north/south where possible. This was further developed by Peter Smail.

Every year both my parents went to the NZFFA conference − it was their annual holiday. One year, 1968 or 1969, they arrived home with three coast redwood seedlings. These were planted adjacent to a 1950 radiata woodlot in a triangle with sides approximately five metres.

My father died in 1970, I took over the property and soon got involved in farm politics. While I kept planting shelterbelts and woodlots on the flats, the three redwoods were forgotten. Fast forward life from to 2004, by which time I was a constituent councillor for North Canterbury for the Regional Council. In that capacity I was invited to inspect the development and redwood planting that the New Zealand Redwood company was undertaking in the foothills of the Conway area in North Canterbury.

It was steep land covered in broom, and requiring serious clearing and weed control, but blessed with reliable rainfall. I was staggered by what I was shown − clearance of weeds on a scale and steepness which was scarcely believable,
good establishment success and incredible growth rates for what I thought was a slow growing species. There must be opportunities for redwoods at Ashley Gorge I thought as I drove home that evening. Perhaps I could plant some in the pine woodlot recently harvested.

Then I thought I should check out the three trees that my father had planted. It did not need an expert to tell me they were flourishing. They were quite outstanding, straight as a gun barrel, about 30 per cent larger that the best of the 1950 planted pines beside them and with smaller branches. The average diameter is 1.25 metres and the height about 34 metres. It is estimated that there are between 10 and 12 cubic metres in each tree.

The decision was not hard. I engaged a contractor to remove the pine stumps and deep rip at 4.5 metre row spacing. I pondered a long time before deciding on 4.5m by 4.5m spacing or 500 stems per hectare. The evidence was there, the branches were not large compared to other species planted at such a wide spacing.

When I chose 4.5 by 4.5 metres I did not realise this was the spacing recommended by Jim Rydelius, the redwood expert from California. He visited recently and told me that fortuitously, in his opinion, I had chosen exactly the right spacing. It was close enough to optimise volume growth and keep the ring width below 20 mm but with enough growing space to keep the branches alive above the pruned height of six metres. Closer spacing would mean a smaller log size or a longer rotation and dead branches with bark encased knots. Wider spacing would result in wider growth rings and a market discount. It was pretty satisfying to get it right with no outside help.

What an opportunity this wonderful tree provided.We have the ideal climate for redwoods at Ashley Gorge. It is a pity I had not seen the wood for the trees sooner, but better now than never.

Redwoods have exceptional growth rates with high value timber perhaps up to three times better than for pine for the best grades. There is a growing demand to replace the reduced domestic supply in California, superb soil conservation values with its coppicing ability, and no stumping or replanting when my successors log the crop. Redwood is a truly remarkable tree. Since I have rediscovered it I have planted a further three hectares and intend to plant more.