You are here: Home» NZFFA Library» Resource Catalogue» New Zealand Tree Grower» May 2016» Profit from a small plantation at Melrose

Profit from a small plantation at Melrose

In the November 2015 North Canterbury newsletter, after the last field-day at a property with a number of small blocks of mixed species, I wrote rather somberly about the economics of growing timber or fibre in small blocks. I caught up with Dugald Rutherford, and he told me about two hectares of radiata pine which he harvested recently. It was pleasing to hear that this returned him over $70,000 stumpage returns after harvesting, transport and commission removed. On an annualised basis this 37-year-old stand, on a sloping corner block of land, earned approximately $950 a hectare a year over its lifetime. This was a well grown and tended block of trees, but it does show that money can be made from small plantations.

For the more technically minded, here are a few facts about the block. Even though the final crop stocking was only around 180 stems a hectare, the volume per hectare was large − around 800 tonnes after 37 years. Some of the pruned butt-logs were over two tonnes each. Despite this, the percentage of pruned logs in the final sale was only 22 per cent, but the remainder of the stems were straight with small branches so that only 10 per cent went as chip. The timber market was better than earlier in the year, but certainly not top of the range. Importantly, the block was not far from the road, so access tracking and skid site making was not a great cost. Distances to the nearest mill at Rangiora and Lyttelton port were approximately 80 km and 125 km respectively.

It is good to write about such sales of timber, but it does reinforce the message that for reasonable returns, the trees must have good access and be well grown. Unless you want to risk your money, the species choice is rather limited to those with assured markets – radiata pine, Douglas-fir and perhaps the cypresses. 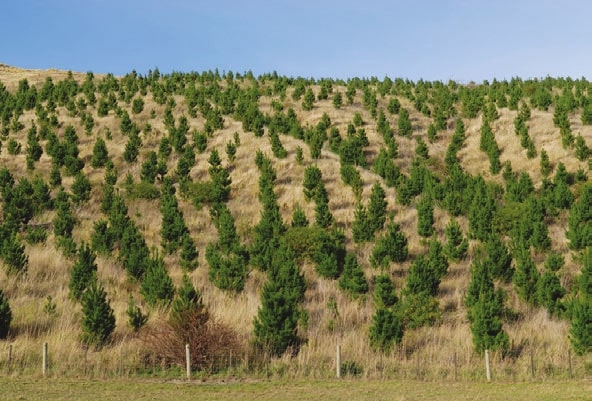