What is woody, grows three to four metres tall in a season, can be harvested every year apart from the first one, is used to make paper and board products, can be burnt in a furnace to provide energy, is a feedstock for making renewable diesel, and makes excellent stock bedding material. At the same time it has the capability of providing some shelter for downwind paddocks. The answer is miscanthus, or more correctly Miscanthus x giganteus.

This is a very fast-growing perennial grass which is a sterile hybrid, re-grows each year from rhizomes that over-winter in the soil, requires very little if any fertiliser, and has a variety of end uses. It is also non-invasive so has no weed potential.

Miscanthus has only relatively recently been introduced to New Zealand. Miscanthus New Zealand Limited is developing the sterile plants, while encouraging people who wish to plant it on their properties. At this stage miscanthus plants are established from the Waikato down to Southland and many places in between.

Because of its sterility, multiplication of the plants has to be vegetative which is time-consuming and can be expensive. However, we have worked out ways of doing this that are relatively efficient, and we are busy learning from others on how to do this even more effectively. Having started with only 34 tissue cultured plants three years ago, several hundred thousand have now been established at a stocking rate of 10,000 per hectare.

Some people are growing miscanthus simply because it looks nice, others because they see that it may have potential to provide stock bedding. Some are growing it purely for sale as an energy feedstock to companies such as Carter Holt Harvey. In most cases, the overall economics of growing miscanthus are quite satisfactory from a farm forestry point of view. If it is used to replace what you currently purchase, the economics stack up even better.

Innovative farmers are starting to look at other uses for miscanthus that have not really been contemplated by overseas growers. Lincoln University is carrying out some helpful research using miscanthus as a shelter strip along the northern and western boundaries of paddocks on Canterbury farms. The intention is to have the miscanthus grow to its normal height of up to four metres each season and provide shelter from north-west winds during the summer and the autumn.

This is being done on centre pivot irrigated dairy farms. Already it looks as if the results will be enough to convince dairy farmers that it is worthwhile sacrificing some ground to a miscanthus shelter strip to get the benefits of the shelter without problems when the irrigation system moves through the shelter. Trees tend to grow too high and can cause damage to the irrigator once they reach the height where they are affected by the sprinklers. 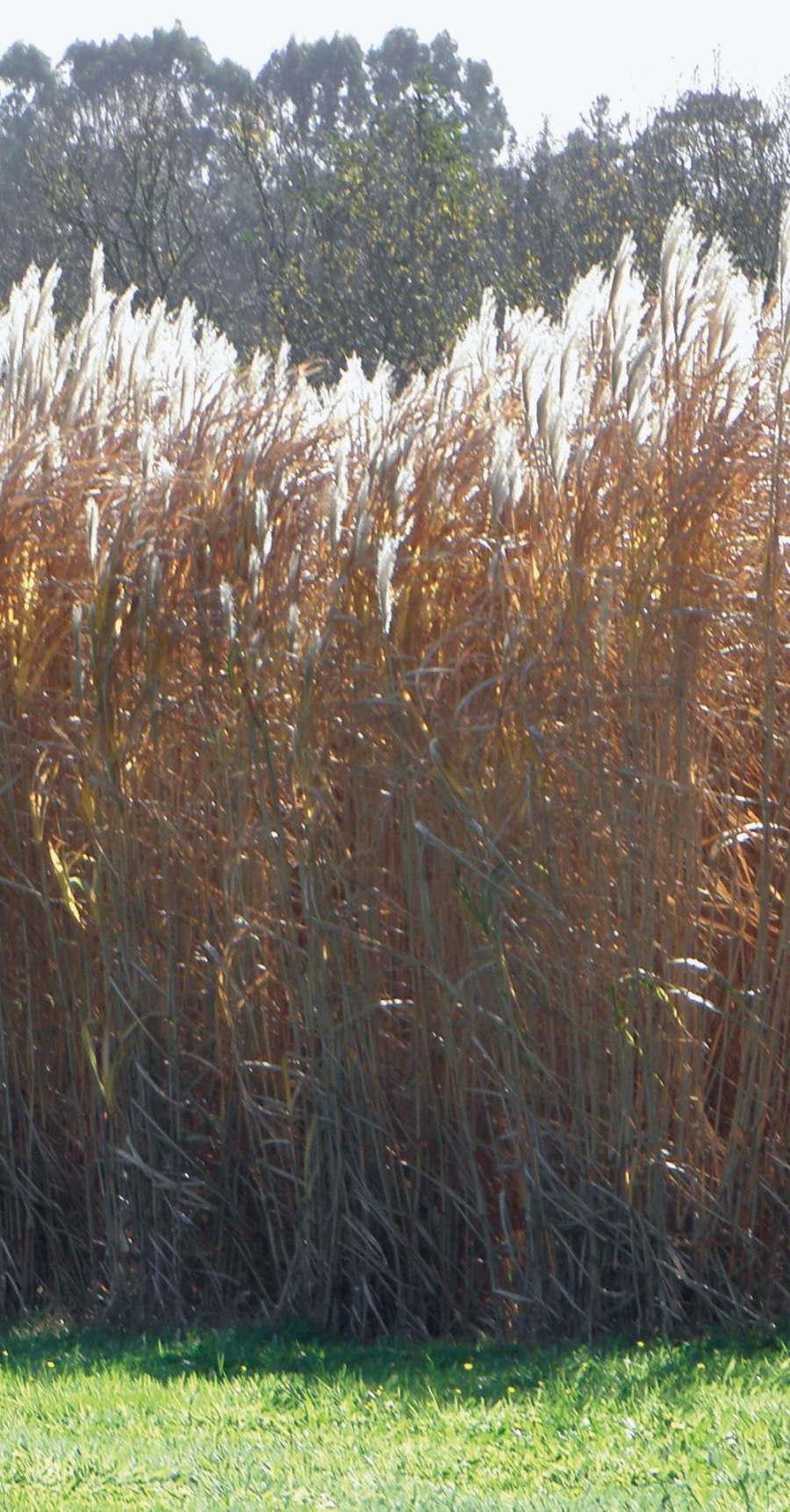 Miscanthus requires a minimum of 600 millimetres of rainfall a year. European researchers regard this as a decent amount of rain, but in New Zealand this means that only a small proportion of the country might not be suitable. Even in Central Otago, although the rainfall tends to be lower than 600 millimetres, much of this falls during the growing season. On properties where irrigation is routine it can be expected that miscanthus will grow well.

The oldest stand we have helped establish is a relatively small site in Hawke’s Bay which was planted by Plant and Food Research. The stand was planted in February 2011 which is the wrong time of year for planting.

However, although we were concerned about how this stand would perform, it grew to about knee-high during the remains of the first growing season and then shot up to almost three metres in the one following.

In the last growing season, in spite of the drought that pervaded the country, these plants still managed to reach more than three-and-a-half metres.

Another stand planted in Hawke’s Bay even later that year on very drought-prone soil did not do quite as well in height growth. However in the 2012/13 drought it provided a very interesting indication of what is achievable in such drought conditions with and without irrigation. The part of the stand without irrigation seemed to have died off but when the rain started the plants greened up and began growing again.

One strip of this stand was mowed by the farmer where the trial is and was used to feed stock. Looking at the complete lack of grass in the paddock immediately across the fence from the trial, it was easy to understand why he showed interest in the miscanthus. We are about to start monitoring the re-growth which started in the spring.

We have also carried out research to assess the feed value of miscanthus as it develops throughout the growing season. The first samples tested were harvested in autumn immediately before the plants started to senesce. An extended feed analysis by Hill Laboratories showed that miscanthus at that stage is roughly equivalent in feed value to barley straw. It is somewhat higher in nitrogen and crude protein. Based on this, we carried out feed value analysis throughout the last growing season and it has potential for silage as a back-up feed. Our experience was that all plants harvested up to Christmas re-grew quite vigorously, and even those that were harvested later are now starting to re-grow.

The limitation is that miscanthus has to be grown on suitable land which has to be gentle enough to run harvesting machinery across it for mowing or baling, or to forage harvest directly into an adjoining truck and trailer unit. This is the same type of land used for growing maize. However miscanthus does not require high fertility soils, fertilising or annual replanting.

In the Lake Taupo area miscanthus has been accepted by the Lake Taupo Protection Trust as a species suitable for planting on previously grazed land as a way of reducing nitrogen leaching into the lake. For these purposes, it is considered that the level of nitrogen leaching from a miscanthus stand would be equivalent to that from a pine forest. This has significant potential economic advantages for farm foresters thinking of growing miscanthus in that catchment.

Miscanthus is also forming the basis of the introduction of technology that allows the production of renewable diesel from feedstocks. We were approached about this because when miscanthus is harvested in winter it tends to have quite low moisture content, an advantage when using it for this type of process.

The big advantage of the renewable diesel technology is that it can be carried out on quite a small scale, producing 150 litres an hour and requiring only 12 tonnes of dry matter a day for a 24 hour operation. It is cost-effective for farmers, agricultural contractors and cartage companies that use a reasonable amount of diesel to a plant established for their own use.

Farm foresters could be planting miscanthus as a feedstock supply for such a diesel plant, with the knowledge that the miscanthus stands have several back-up uses should they decide to run the renewable diesel plant on cheap local sawdust or cereal straw.

The message from all of this is that miscanthus is very versatile and easy-to-grow. As it is perennial, almost all of the expenditure is at the beginning in the preparation and planting. We are working with international assistance to reduce the cost of the plants and to get the cost of planting efficiently mechanised so that the overall establishment cost is reduced.

Miscanthus could be the plant of the future. It is woody but is not a tree, is perennial but is harvested annually, and can supplement most other farm forestry activities.