This is one of the field day reports from the 2012 Balclutha conference.

Alighting from the bus on the edge of Lawrence township we were reminded of the gold-mining history of this area. All manner of gold-mining memorabilia was on display, especially a very impressively restored stamping battery. Gabriel’s Gully was the site of New Zealand’s first big gold discovery, mostly mined by sluicing, a process which left this valley bottom buried in tailings and several metres higher than originally.

Steve Robertson, or Stevie as he is known, purchased this property of 58 hectares in 1993. It was covered in gorse, broom, willow and blackberry and Stevie proceeded to clear it and run sheep there. In 2008 he sold two thirds of the hill area, leaving a 17 hectare block which included an extensive area of alluvial valley below the confluence of the Gabriel and Wetherston streams.

Stevie has lived in Lawrence all his life and obviously has a strong sense of community spirit. He worked with the Forest Service before operating his own silvicultural business. His high quality of workmanship is well known in the area. In the September 1993 he invited Lawrence Area School to come and listen to his long-term vision for BellVue. This began a decade-long partnership planting trees, shrubs and grasses. That first day they planted 1,600. Each year the students enthusiastically return to plant some more and see how well the previous plantings are growing.

In 2004 the Department of Conservation awarded the Richard Henry Meridian Energy Southland Schools Conservation Award to this project. As a group the reward of planting far outweighs the hard work, and the school is as enthusiastic now as when they started. The South Otago branch has also recognised Stevie's work with school pupils, awarding him the John Edmonds Special Grant. 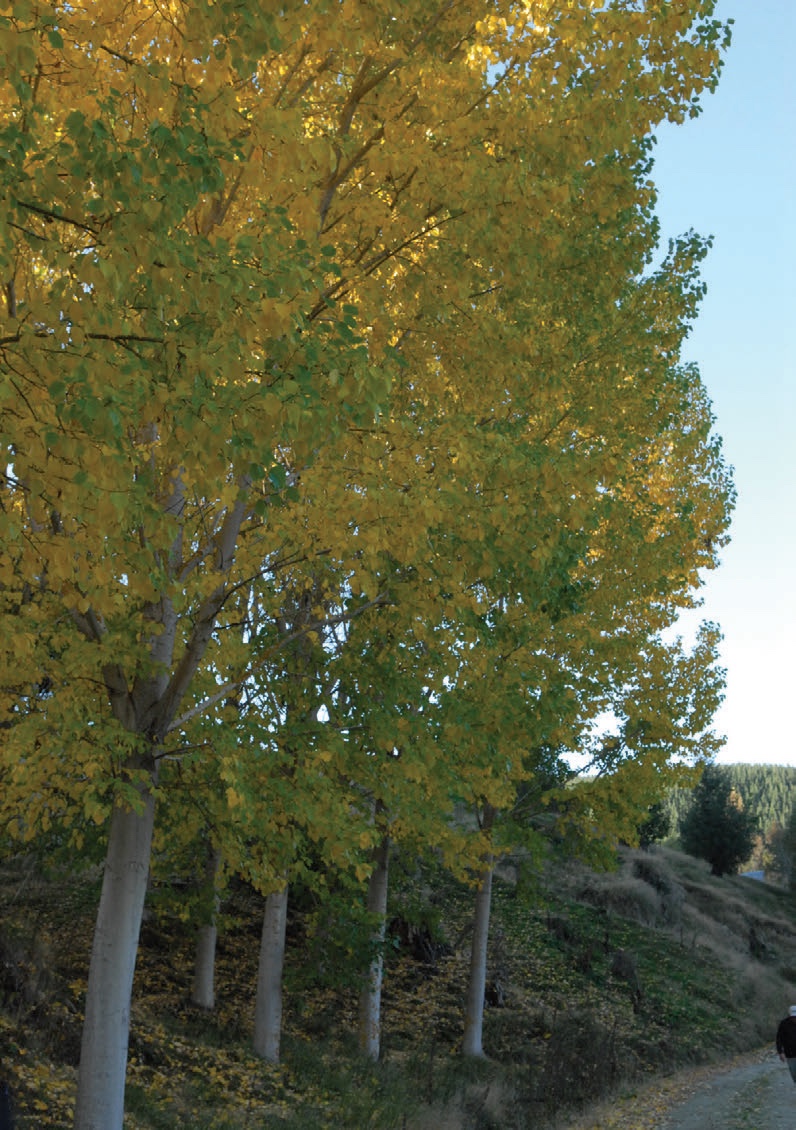 The pond project started in 1997 with water fed by a diversion race from the stream, allowing brown trout and other fish an access. A second pond was built lower down in 2000 and the third and largest, at 1.5 hectares, was constructed on the site of the old Lawrence tip in 2003. So far $120,000, including 465 hours of digger time, has been spent on this project which covers almost six hectares.

Stevie was born with severe dyslexia, not diagnosed until later in life. At age 40 he embarked on a year of self-improvement and taught himself left from right and how to read. His first book was not a gripping novel but a book on radio valve technology.

He is a very innovative person, being described by one local as ‘a genuine No 8 wire, I’ll build anything type of guy’, which is reflected throughout this project. An automatic fish feeder created from an old alarm clock combined with the mechanism from a clay-bird thrower is one of his creations. This system feeds the fish twice a day. As we walked around the property we could not help admiring the professionally built rock walls, stone arch bridges and concrete spillways, all constructed by Stevie.

It was pleasing to view ponds that were clear of water cover such as lilies, and so far waterfowl have not introduced floating aquatic weeds. The edges well planted and covered with toi toi and flax, interspersed with cabbage trees provide excellent cover for nesting birds. Further back against the hill were taller trees, mainly radiata pine and Veronese poplar in full Otago golden splendour. Apparently Stevie’s pride and joy is a magnificent mountain cabbage tree growing beside the water race – it was a very impressive specimen. 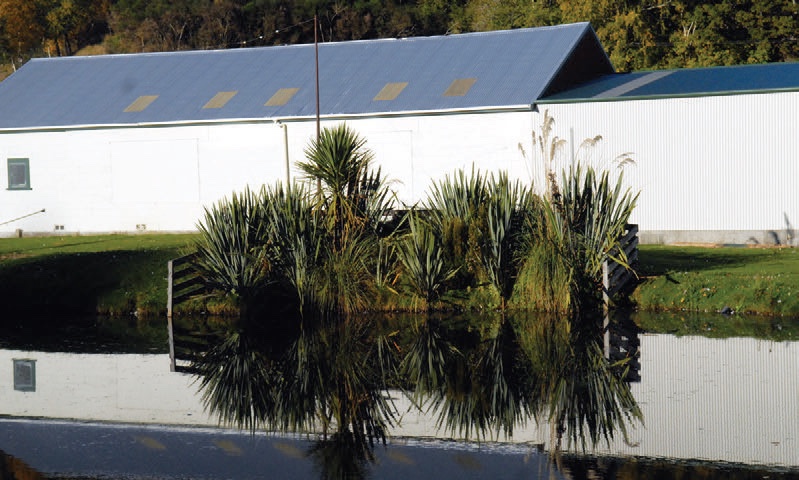 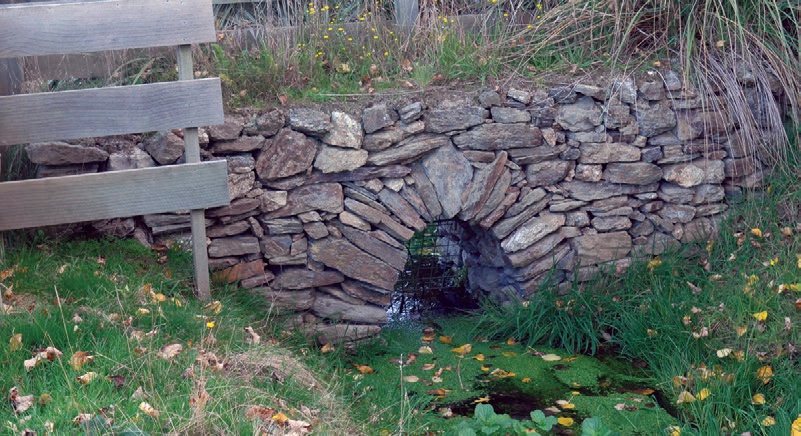 The underlying theme of Stevie’s work seems to be historic, with the preservation of old buildings from around the area, such as Harry’s Hut, once a railway cottage built on skids for transport from job to job, the old stables once used in the Cobb and Co business built in 1885, and now plans for a sod cottage. An area of hillside has been earmarked for a live display of sluicing for gold – the original pipework and sluice gun await re-assembly. Stevie might even get lucky.

A few old apple varieties have been planted and one in particular producing melon size fruit was very impressive. The name is unknown but that did not deter the ducks from scoffing the windfalls.

Stevie’s dream has become reality. This property is a credit to its creators, an asset to the Lawrence community, and will complement the scenic vistas of the rail trail and Otago. 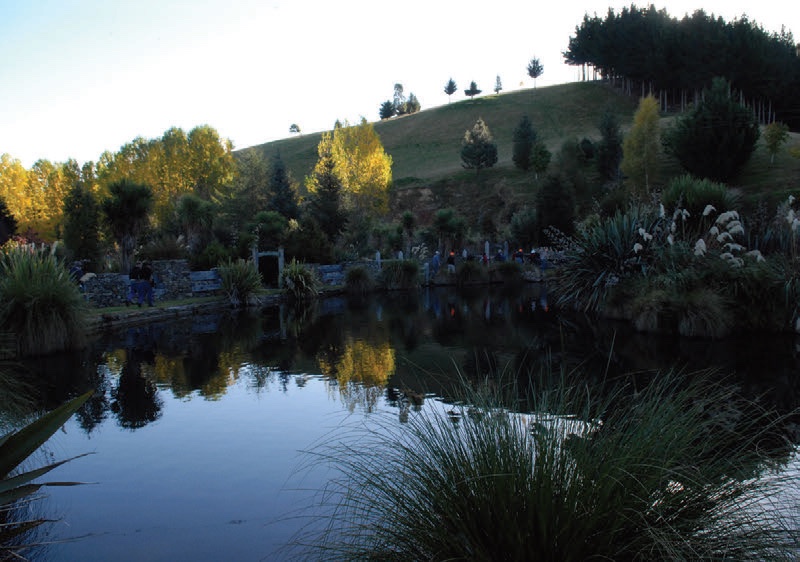 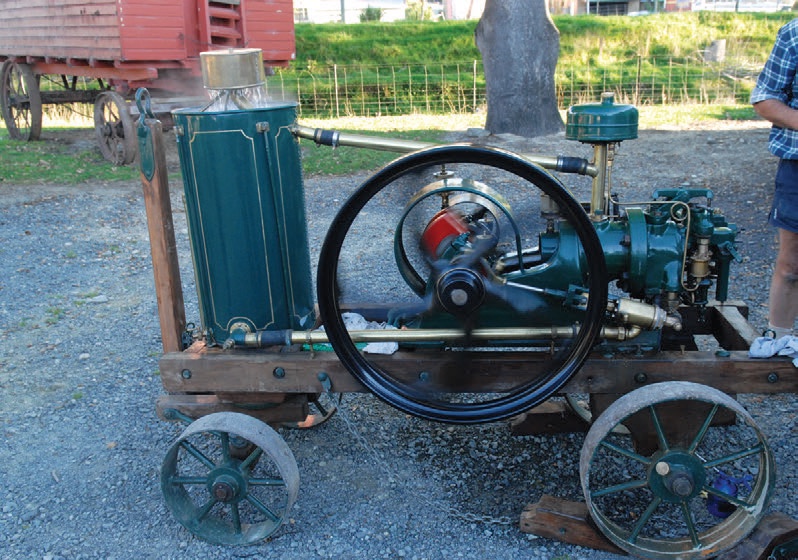